About a month ago, I managed to shatter my right ankle and shin. Thanks to modern medicine, those bones are now reinforced with slender lengths of titanium.

Besides the sudden limb shortage, though, the biggest issue has been the summer heat: intensive activities make the inside of the cast unbearably hot. Can we do better than an ice pack?

If we rearrange the thermal conductance equation, we get . So to maximize the heat transfer rate:

Nowadays, it averages about 32 degrees Celsius outside. Normal human body temperatures hover around 37 degrees Celsius, radiating about 45 Watts per square meter of skin, though this can go over 300 Watts per square meter when performing intensive activities. After a few experiments heating bags of water with known temperature and volume with body heat, I’ve empirically determined that a small cooling pad can sink up to 5 Watts - more than enough to have a noticeable effect. 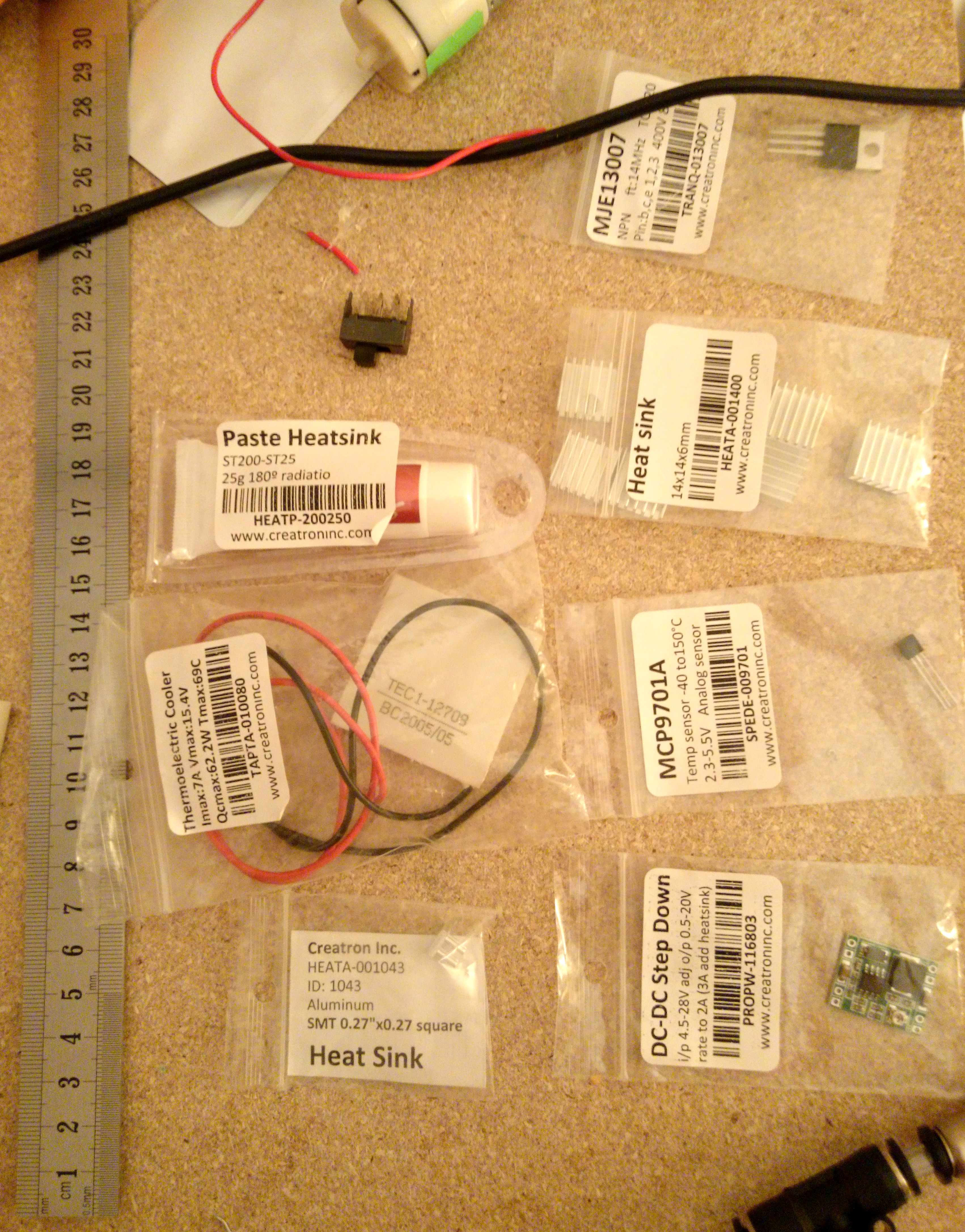 First, a quick test with the Peltier cooler to see how it works. It turns out that when red is power and black is ground, the side with text on it becomes hot and the other side becomes cold.

I originally meant to use a separate power transistor to turn the cooler on and off. Turns out it’s not necessary: according to the MP1584 datasheet, pin 2 is an Enable input, which allows us to turn the DC regulator on and off without the power transistor. Since this pin isn’t broken out, I soldered some enamel wire directly to it (this is the blue wire on the schematic): 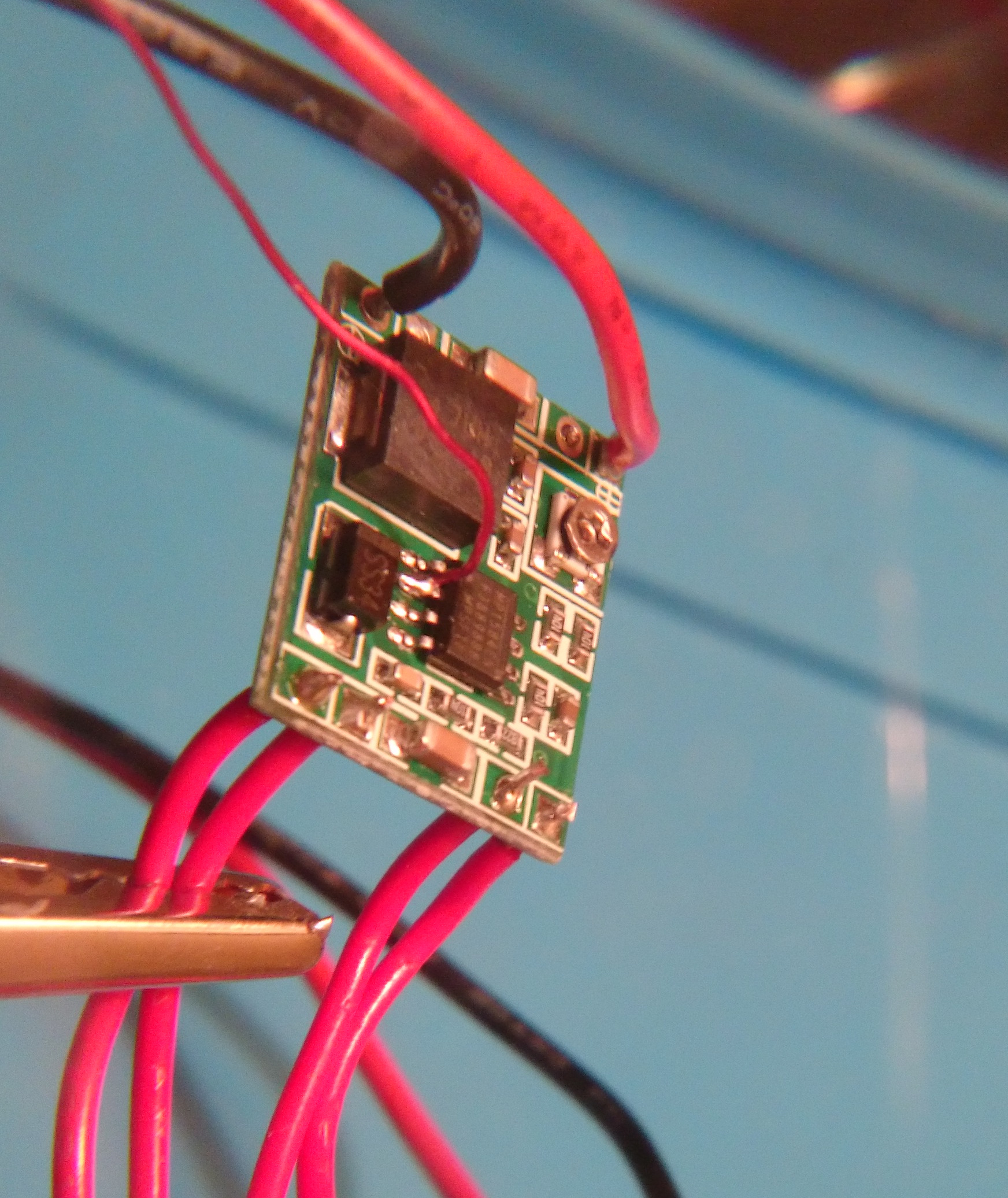 As mentioned earlier, our DC regulator will need a heat sink to handle the load. Where does the heat sink go? Well, if you look closely at the bottom side of the board, you can see 6 tiny holes, which happen to be directly below the MP1584 chip. 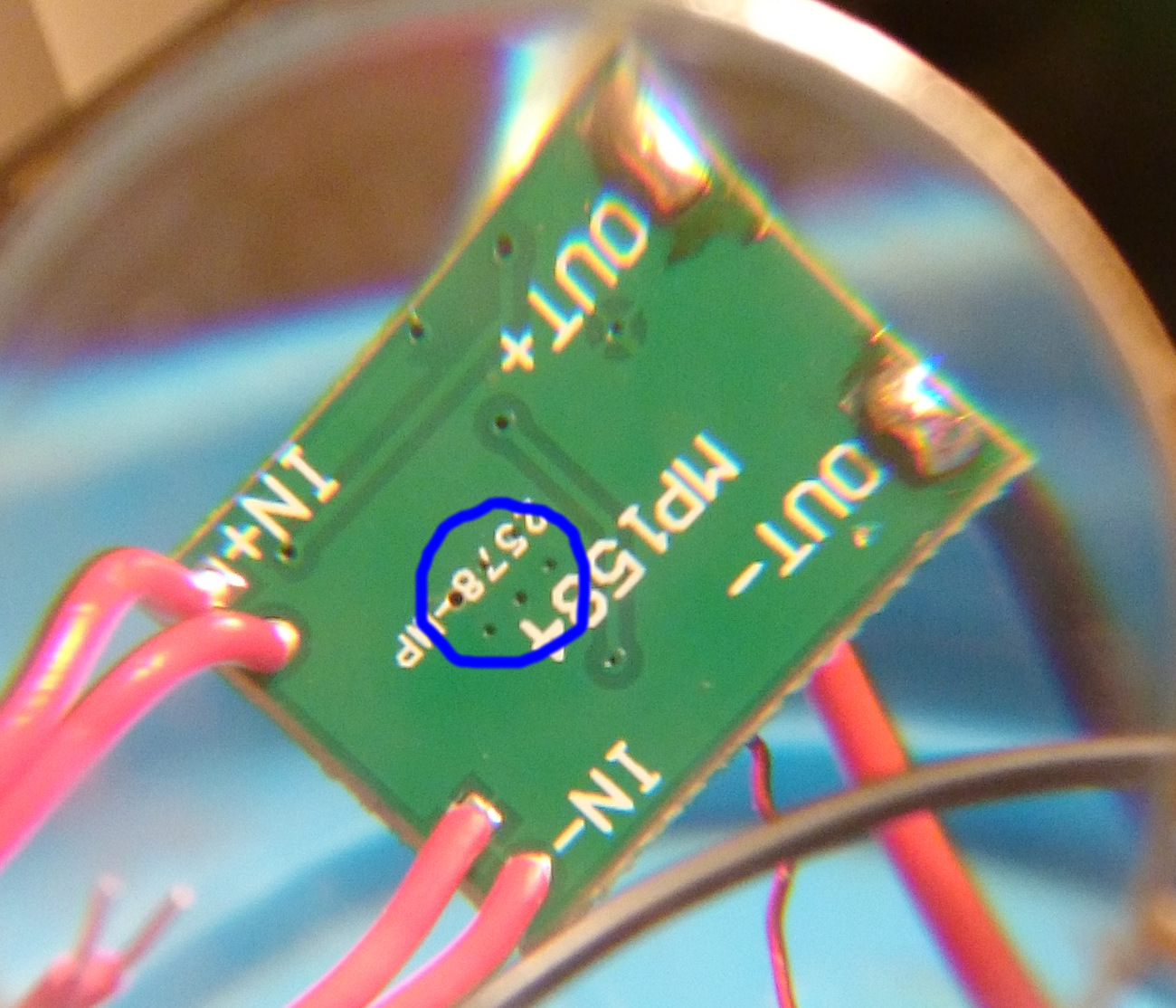 Going off page 14 of the MP1584 datasheet, I’d guess that those are thermal vias - solder-filled holes that conduct heat from the chip into the ground plane. We’ll clean the board surface with 90% isopropyl, and then place the heat sink directly on top of them.

Same thing goes for the Peltier cooler. After cleaning the side that gets hot, we can just plant the remaining heat sinks in a grid pattern. The first one looks like this: 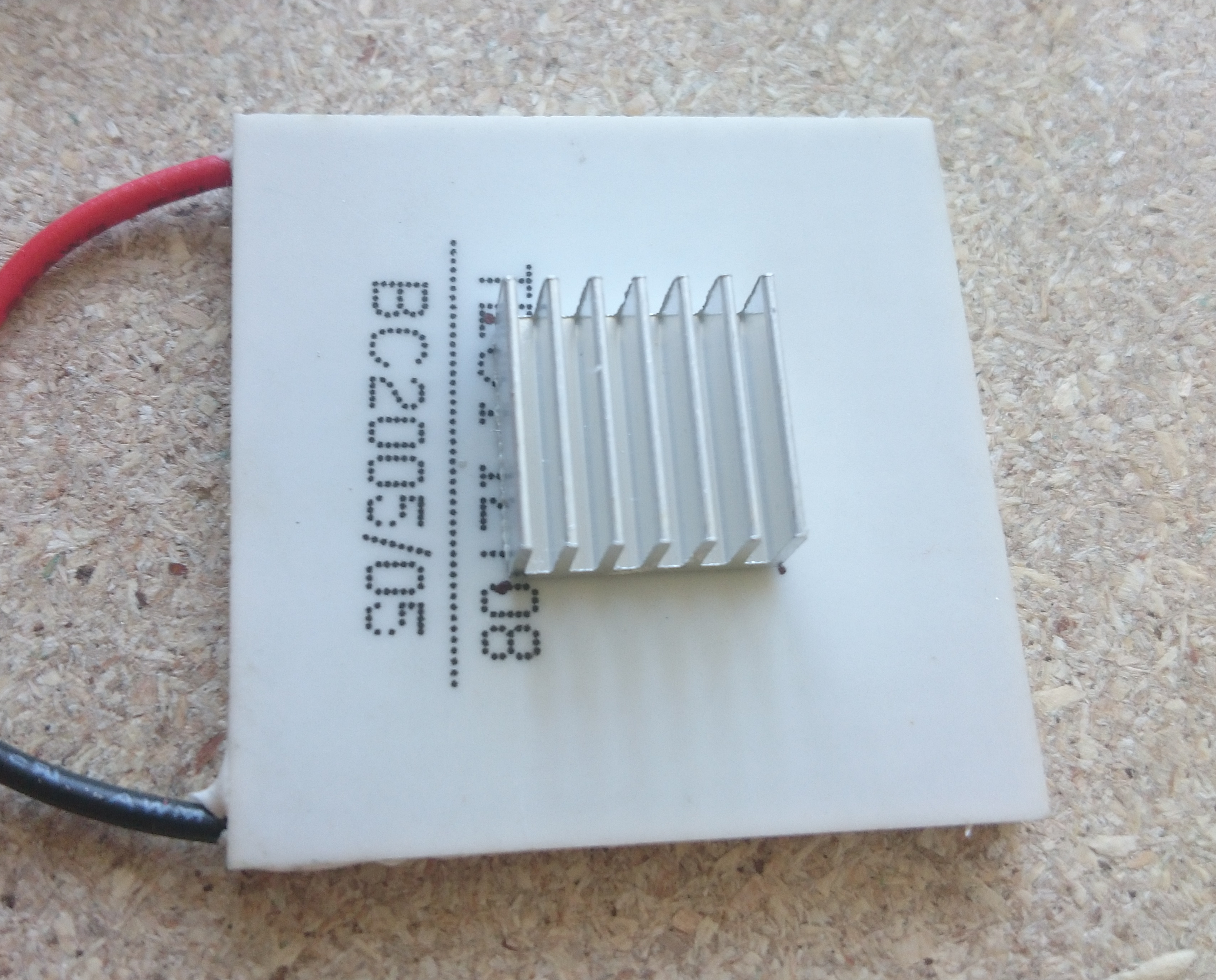 Fritzing schematics are really useful for showing how things fit together at a glance. Here’s one for this project: 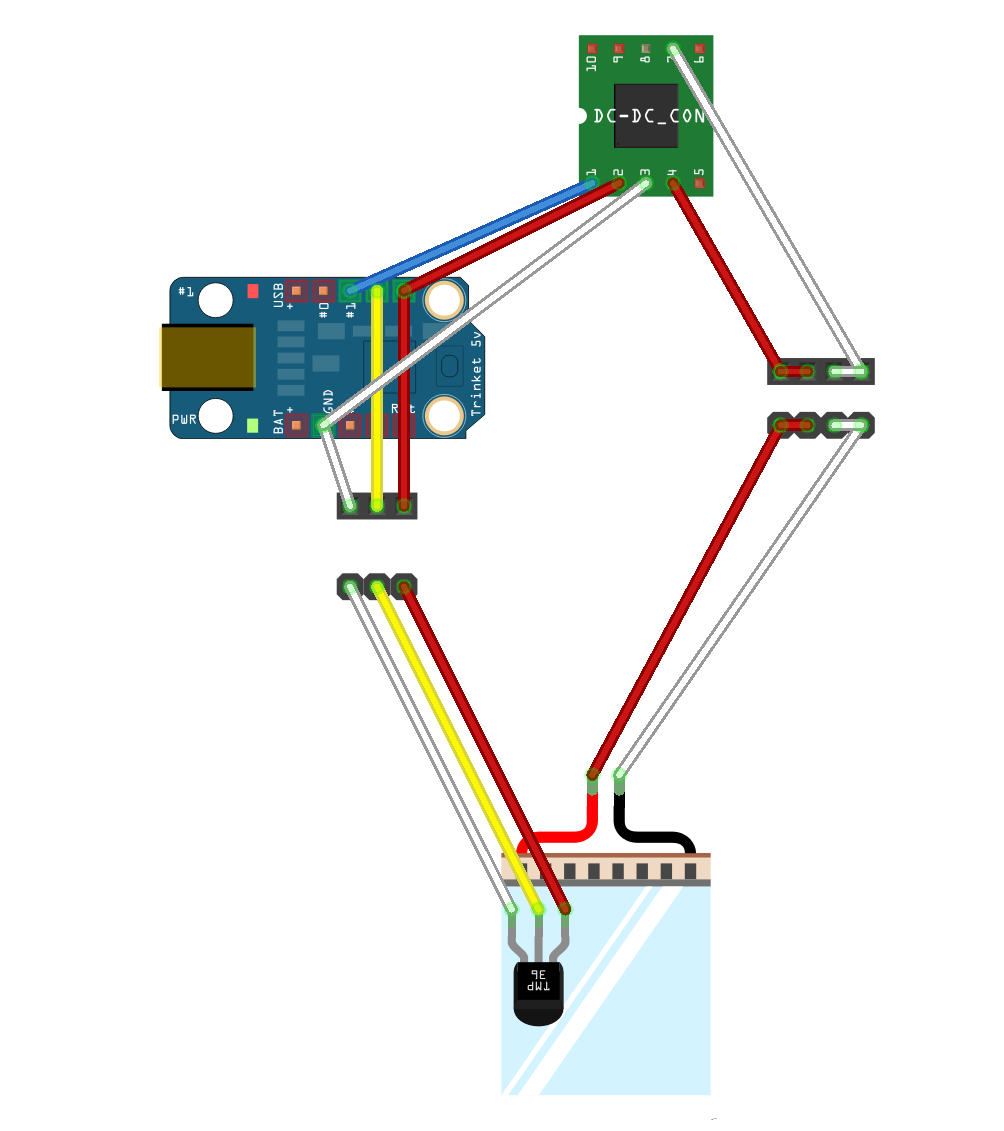 First, we’ll connect the female header to the Trinket as shown on the schematic. It’s glued to the bottom of the board to keep things organized: 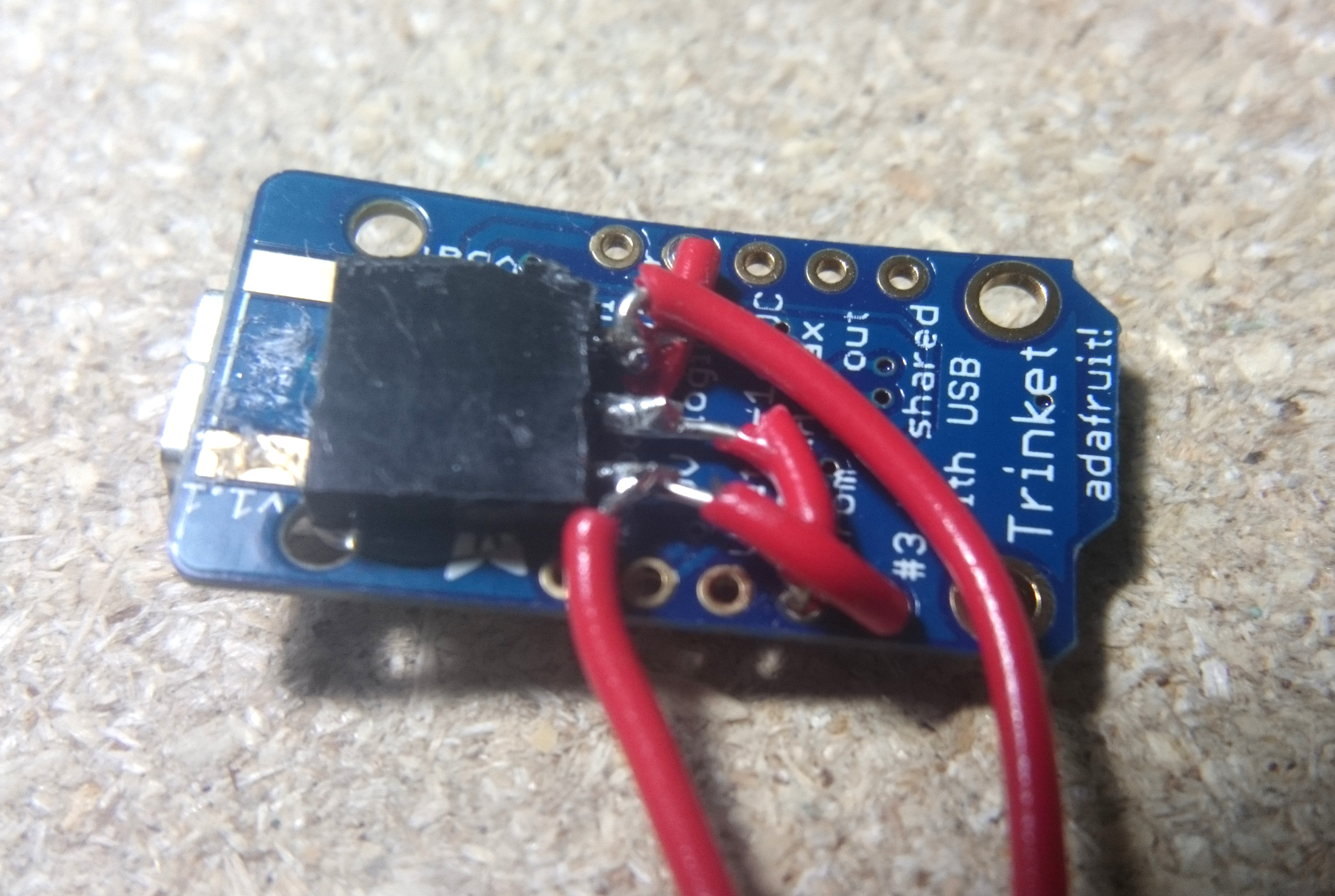 It’s hard to hold steady when you’re leaning on one leg, but the connections are solid enough. Next, we attach the temperature sensor to a male header, so it can plug into the Trinket: 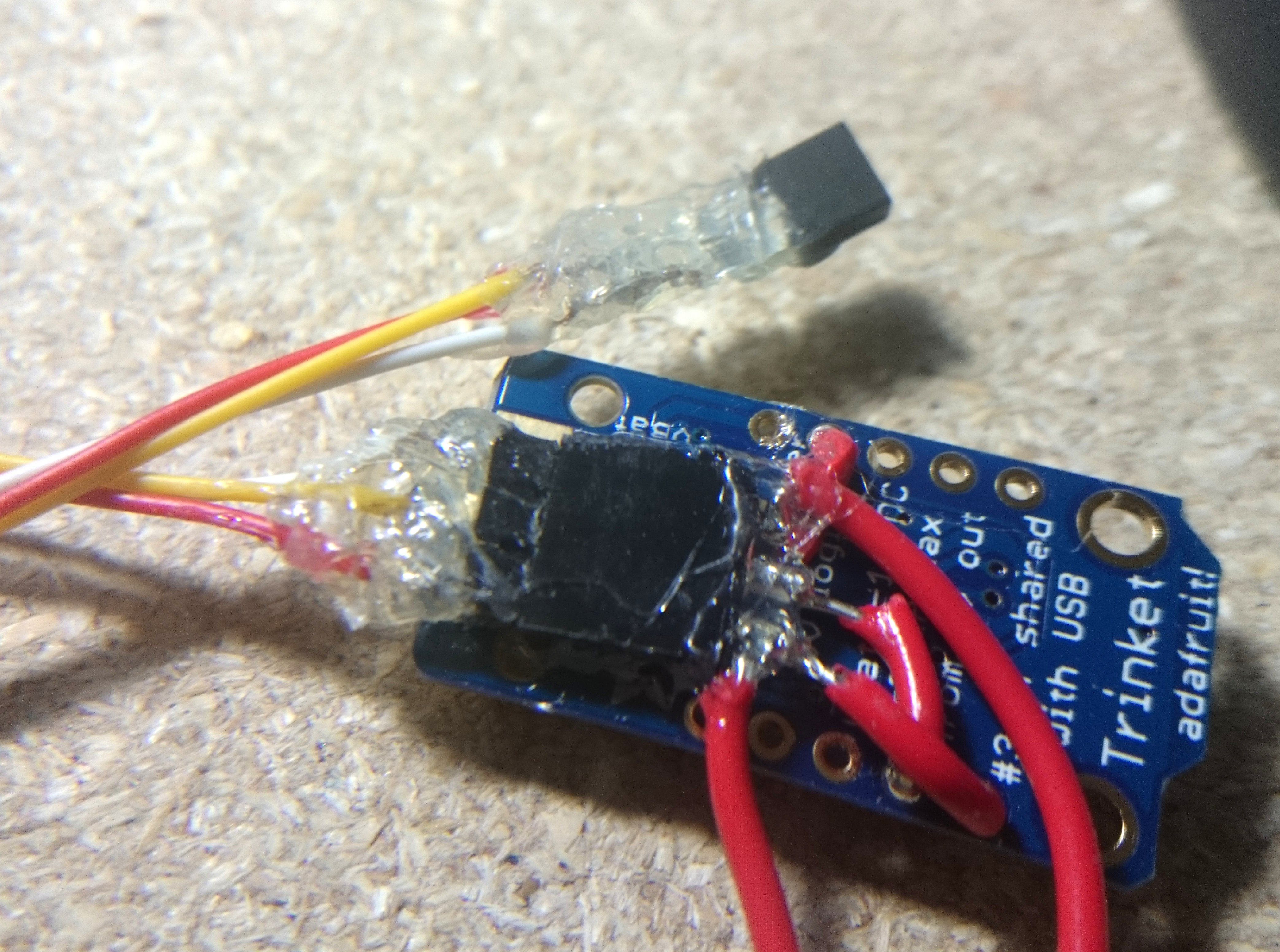 From top to bottom, the header pins are ground (white wire), temperature sensor reading (yellow wire), and 5V (red wire). The hot glue is a great way to keep the leads insulated, as long as the temperature doesn’t get high enough to melt it off while in use. Hopefully it doesn’t, or else my leg is going to be pretty unhappy.

Now the same thing, but for the leads on the Peltier cooler. Due to the current requirements, we use two pins in parallel for each wire (each pin is rated for about 3A): 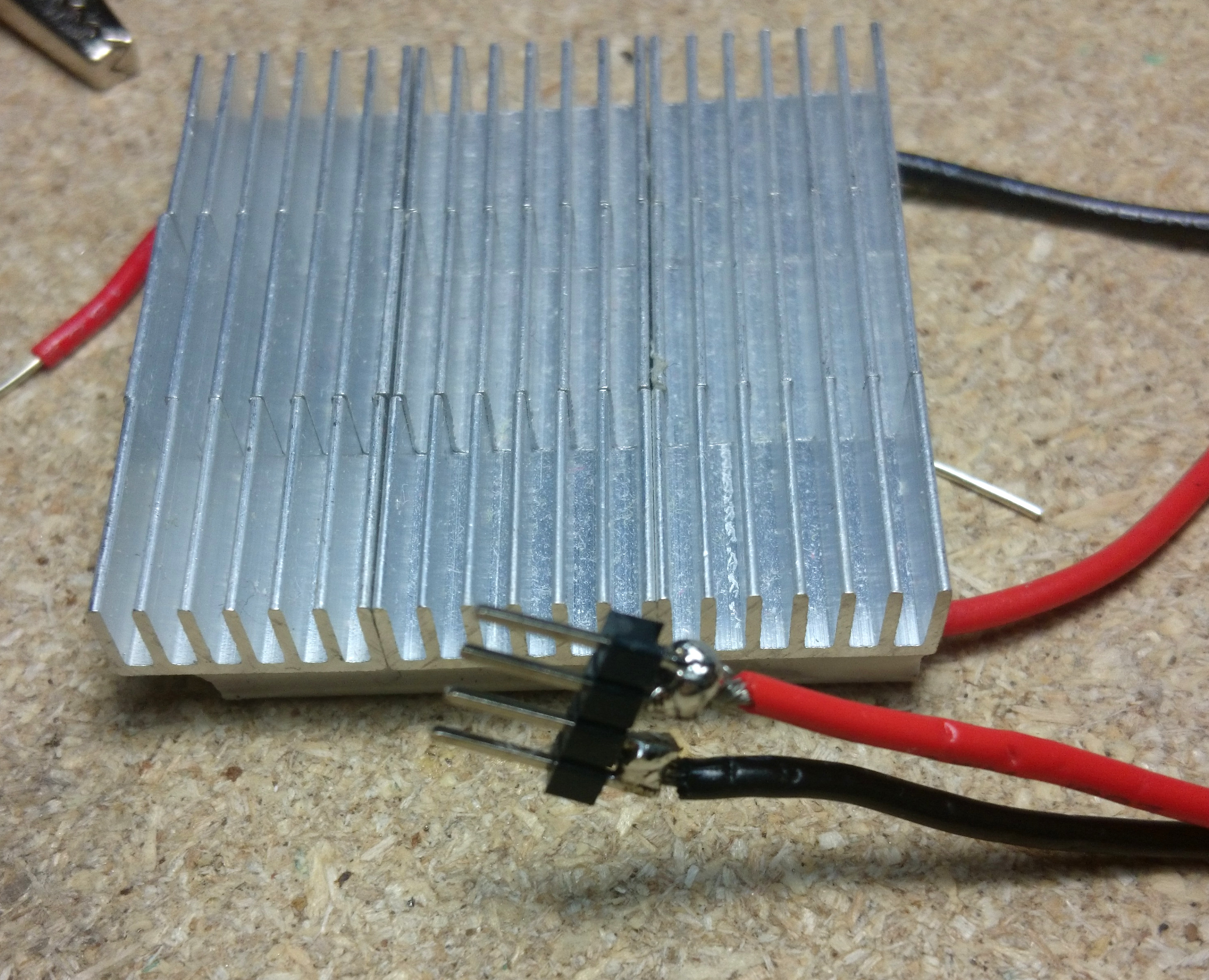 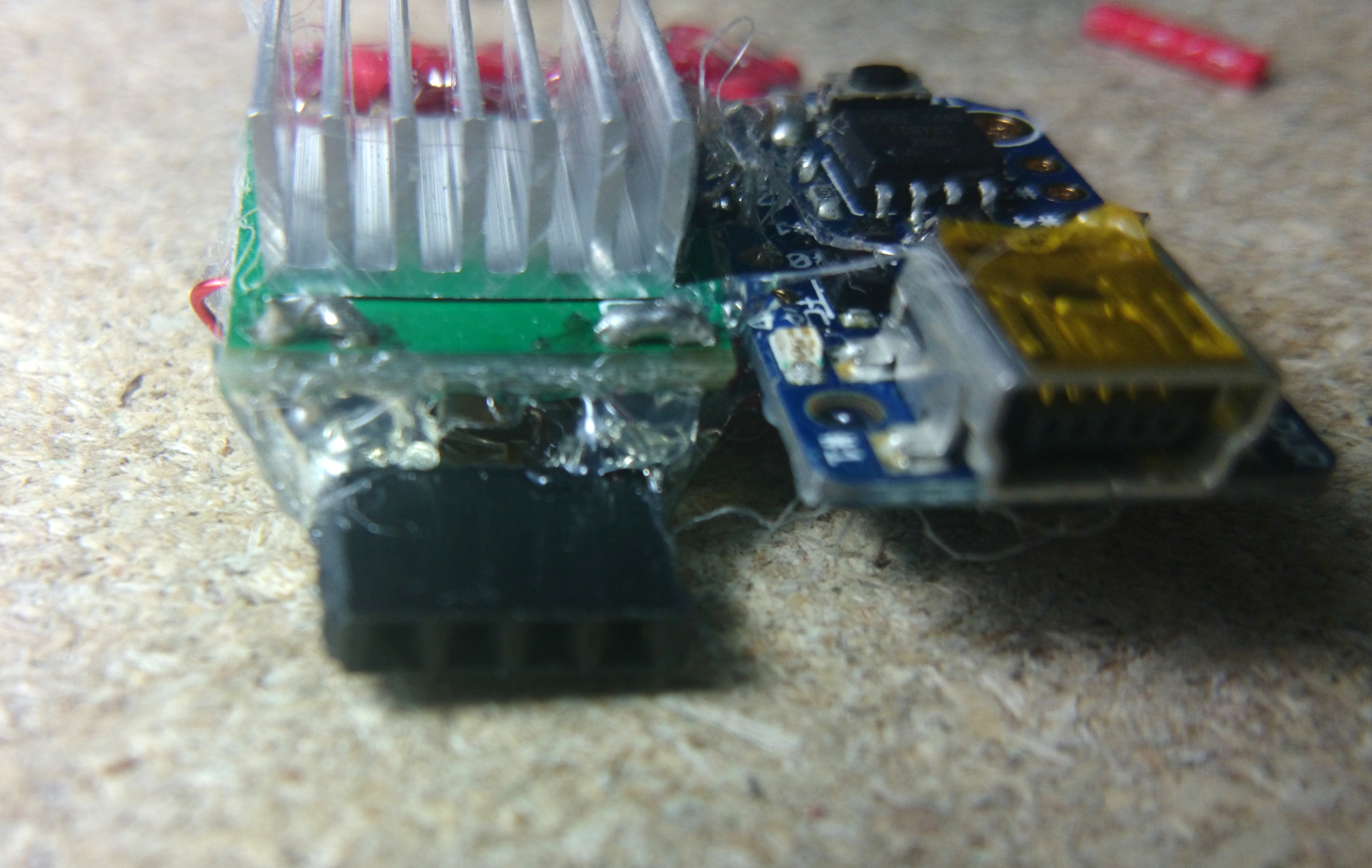 An old USB-A to USB-micro-A cable can be cannibalized for the USB-A plug. We’ll connect the 5V and GND pins to 3 pins each on a 6-pin female header: 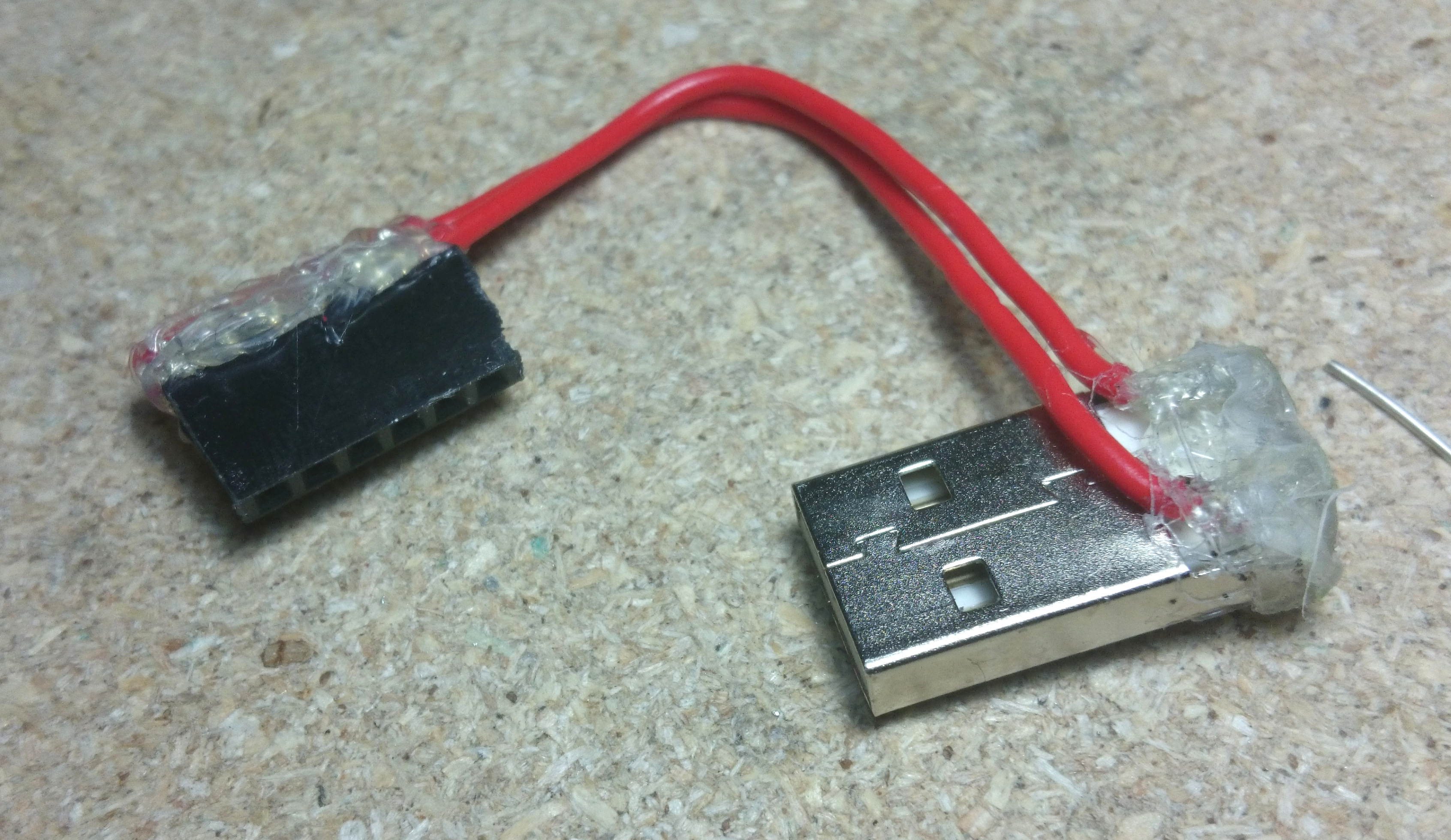 The leftmost 3 pins on the header are all 5V, while the other 3 are ground. The power leads for the DC regulator and the Trinket are now ready to be connected! 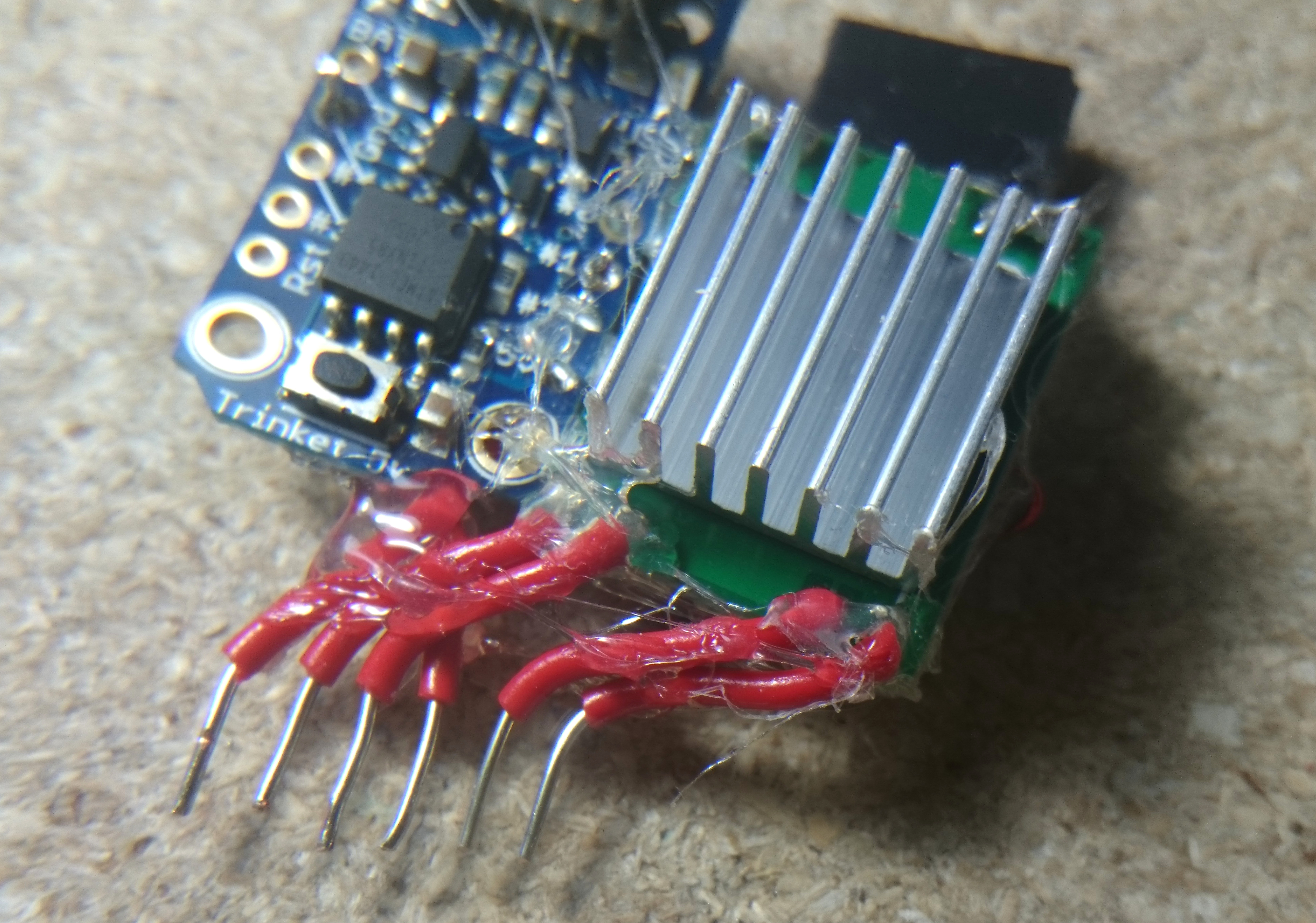 At this point, the cooler is more or less complete: 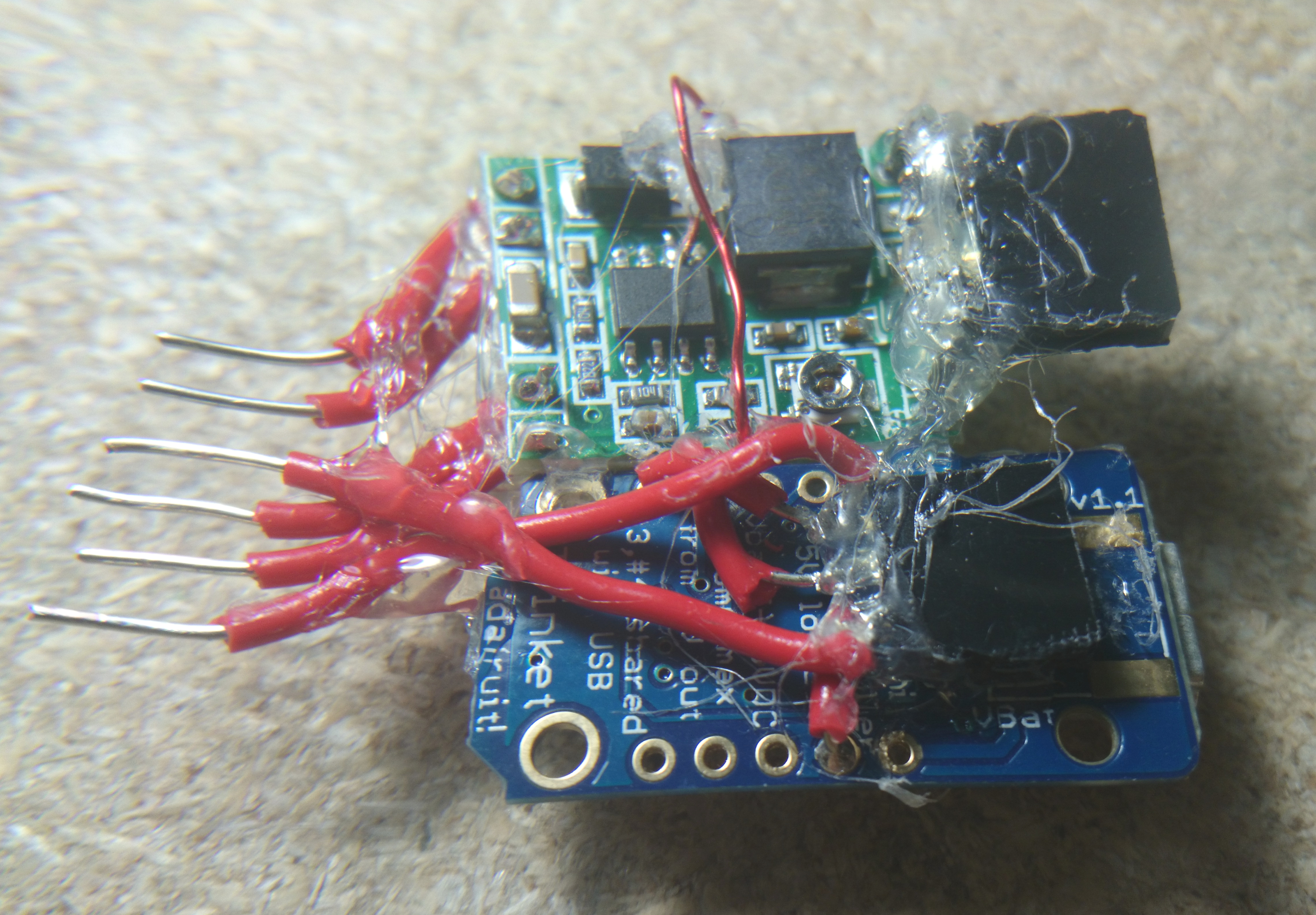 Here’s the entire thing, with the power, Peltier cooler, and temperature sensor connected: 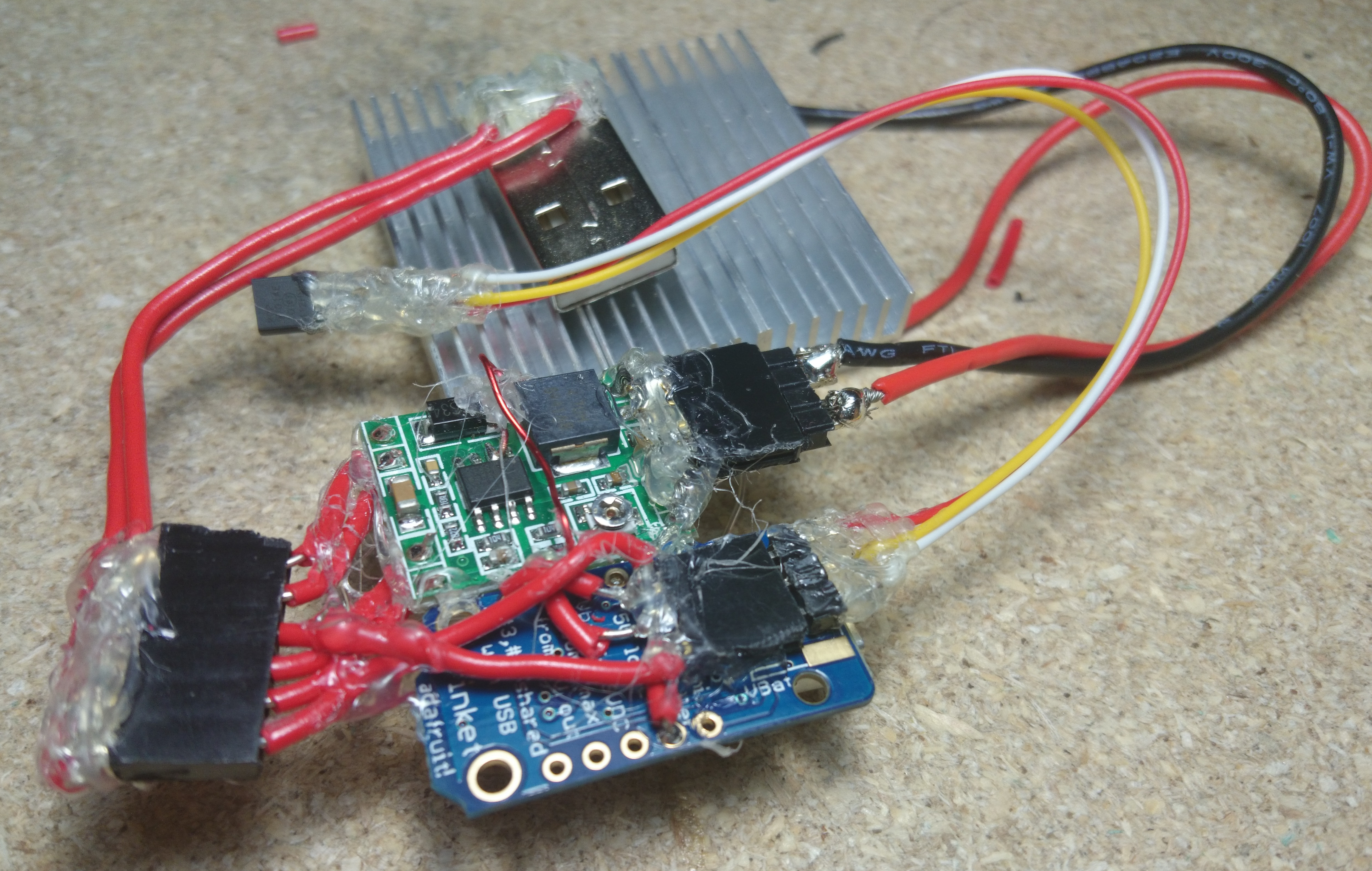 For testing purposes, I whipped up a quick simple on/off sketch and loaded it onto the Trinket - turn the cooler on if the temperature is too high, turn it off otherwise:

After programming, the cooler is ready to use - just insert the USB-A plug into a portable power bank and wait a second for it to initialize.

The cooling power is adjustable by changing the potentiometer on the DC step-down switching regulator (the screw on the non-heat-sinked side of the board) to change the board’s output voltage. This setting affects only how quickly the cooler will try to reach the target temperature. Higher voltages mean faster, but less efficient cooling, while lower voltages mean slower, more efficient cooling. This is because Peltier coolers work best when there is a large difference between the target temperature difference and the actual temperature difference.

The first test took place on top of a wrist, with the temperature sensor just beside the Peltier cooler: 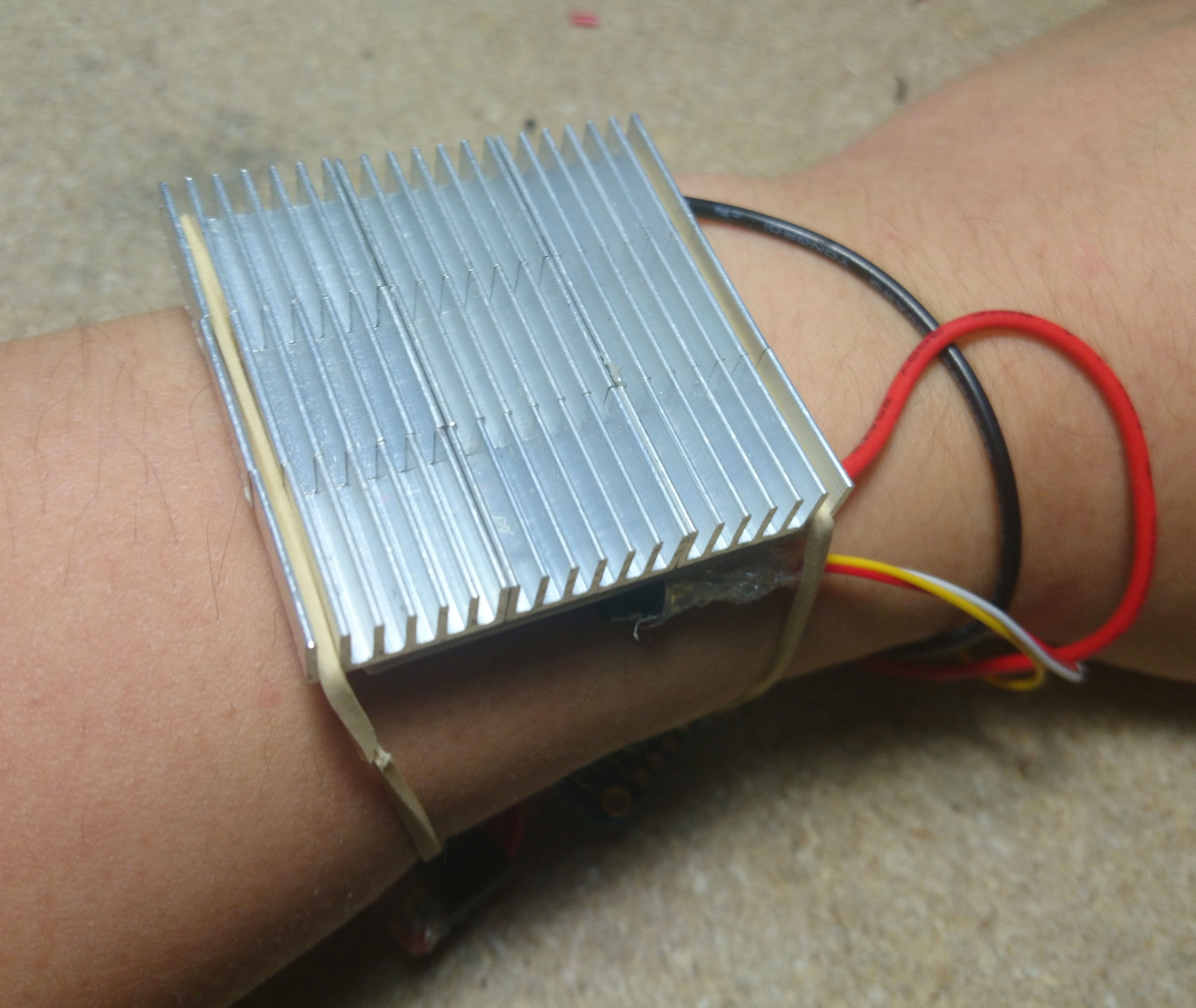 The green LED on the Trinket means that the device is on, and the red LED means that the cooler is active. The rubber bands weren’t that great at holding the assembly in place, so I switched to clear tape. In the future, it might be worth adding pins to accept a standard watch strap.

After a full day of use, it stopped working, probably due to being soaked in sweat. A quick rinse in deionized water fixed that. Covering all those parts in hot glue would probably make it waterproof (while also making it a lot more difficult to maintain), but it’s not a big deal for now.

When in use, the cooler manages to keep the temperature at a fixed, comfortable level. It’s definitely a big step up from an ice pack!