Back in November, Hackwestern II saw myself and 3 teammates sitting in London, with 48 hours and no project ideas. The obvious course of action was therefore to build a light painting robot:

Delta robots are commonly used for pick-and-place machines and 3D printers. The nice thing about these designs is that we don’t need to move the actuators themselves. That means simpler wiring, faster motion, and better efficiency.

LightPainter is a delta-style robot. It rapidly moves the LED on its tip, animating the color and intensity to draw 3D shapes on long-exposure photographs: 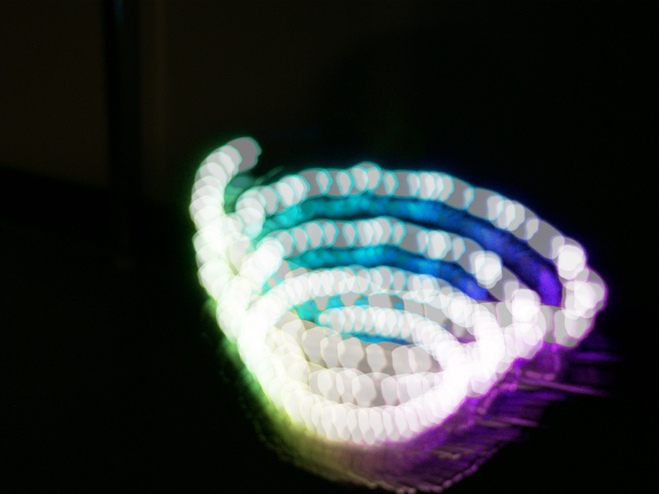 Let’s take a look at the robotics design and construction.

LightPainter isn’t strictly a delta robot, since it doesn’t keep the end effector (the RGB LED) at a fixed angle with respect to the base. It also uses a somewhat unusual actuator arrangement, which results in a smaller footprint without reducing the robot’s reach and simpler math for controlling the arms.

Delta robot kinematics are relatively well-studied. However, most papers (like this one) leave out a lot of detail, such as choosing knee orientations, edge cases and singularities, and so on. Here, we will do a more comprehensive analysis and use it to write more robust inverse kinematics routines.

Typical delta robots have this configuration:

The red actuators move the green actuator arms, which move the blue end arms to position the yellow end effector. The animation armature is highlighted in orange, while the path of the end effector is visible as a black line. Note that each arm pivots at different points on the base. By moving the actuators off to one side, we can have the same pivot point for all three actuator arms:

Let’s solve the inverse kinematics for the latter system. First, we’ll define some variables of interest: 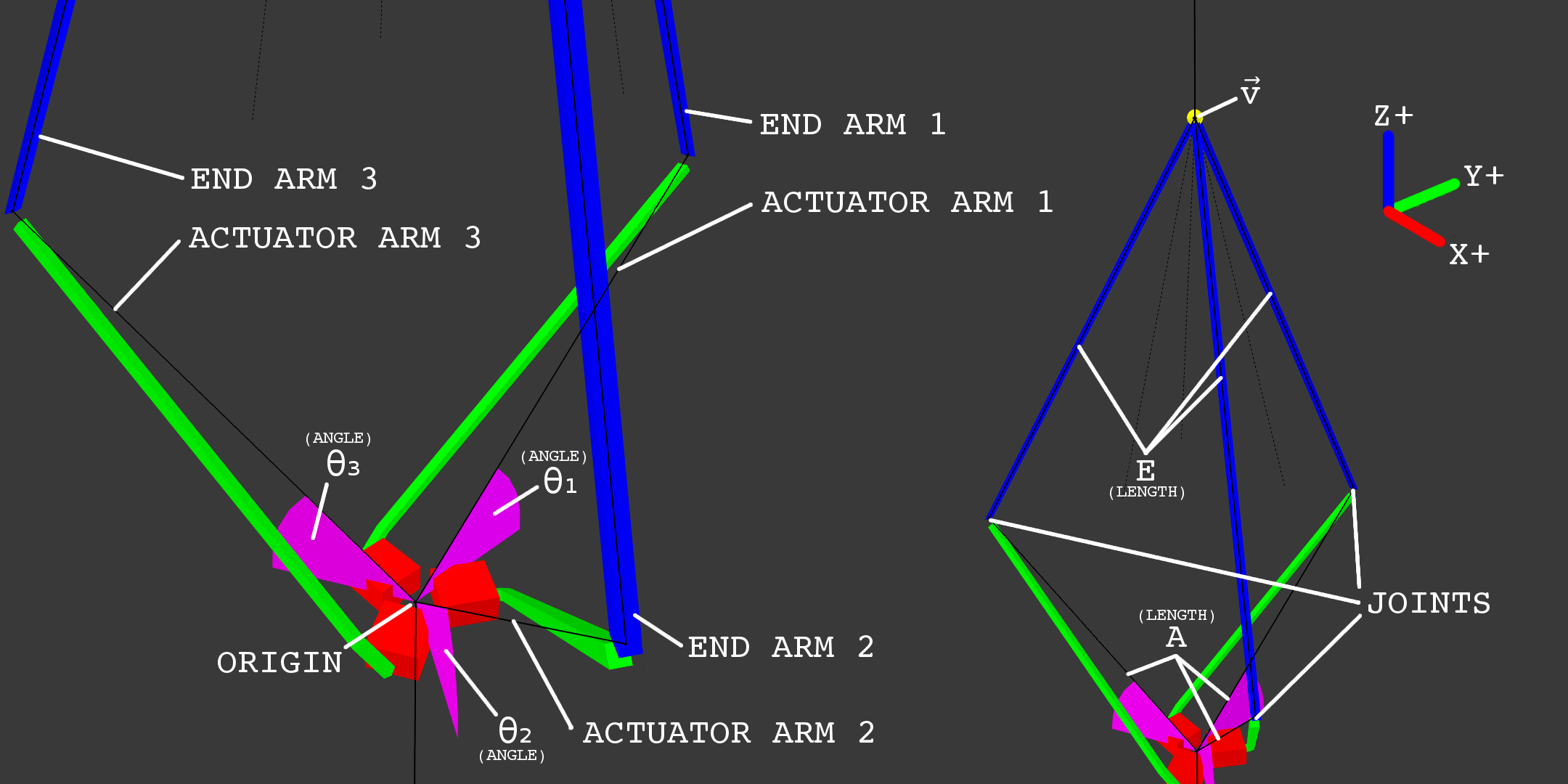 Note that on the diagram, the imaginary black lines going from the origin to the joints are the actuator arms, rather than the green pieces that the robot would actually have connected to the actuators in real life. This is done to more easily define the actuator angles and simplify the math a bit later on.

Solving the inverse kinematics means that we determine a function that finds given . That means that given a position, we can compute the necessary actuator positions that move the end effector to that position.

We first observe that the joint between an actuator arm and an end arm is always on a 3D circle around its corresponding actuator’s axis of rotation. This is because its position is determined purely by the actuator’s rotation and the length of the actuator arm: 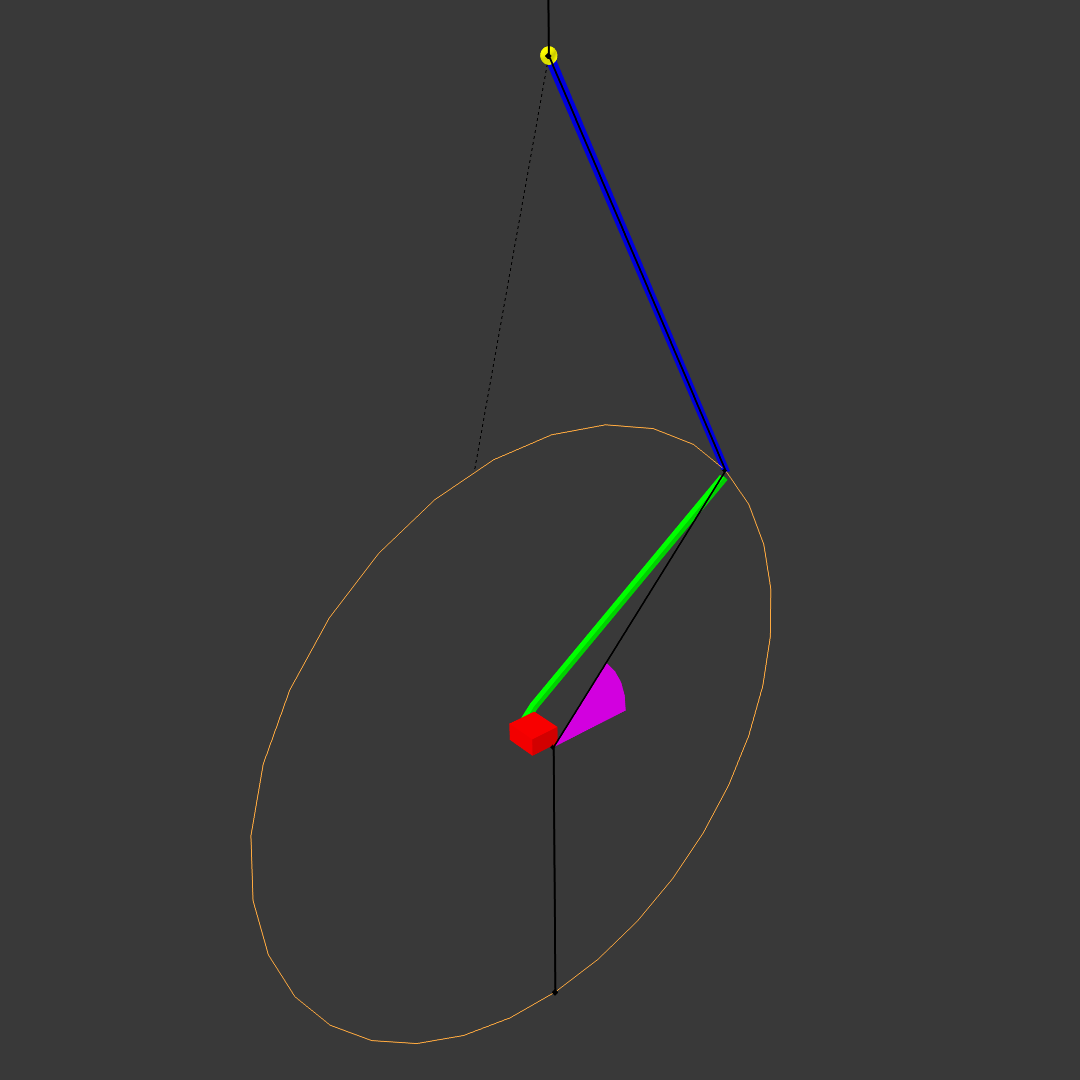 We can write a function for the position of a joint given its corresponding actuator angle, by modifying the parametric formula for a 3D circle, . 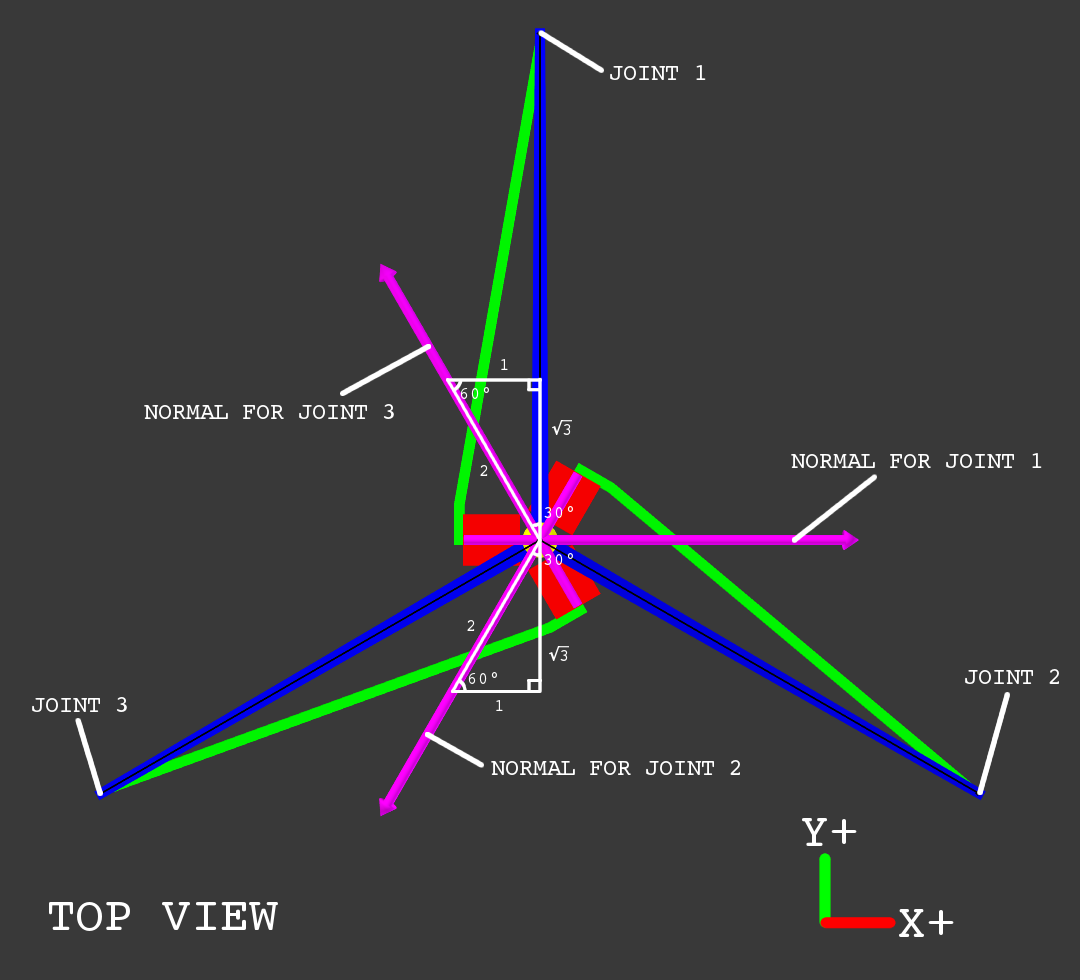 While this is a valid equation for positions given an angle, it’s not the same angle we defined earlier on the diagram. As-is, at , is a vector pointing directly up, which means . So , and the position of the joint given is actually .

Using the trigonometric identities and , this becomes .

Basically, is an equation for the circle traced by a joint as the corresponding actuator turns. For each actuator angle from -90 to 90 degrees, will return the joint’s position.

With this, we should now be able to solve for (WARNING: LOTS OF MATH AHEAD):

This is quite straightforward to implement in code. Here, I’m using Python 3 to demonstrate the concepts, but this can trivially be translated into a lower level language:

The design was pretty much made up as we went along, based on what materials could be scavenged. For example, the base and arms were all made out of empty Mountain Dew cans and assorted litter found around the room. The bottom of a soda can became the base for the arms:

Since we didn’t have any universal joints, actuator arms and end arms were joined together by gluing them to flexible strips cut from ziplock bags. This actually behaves a lot like a universal joint, if you don’t think about it too much. The arm actuators are SG90 servos (nylon-geared analog micro servos, generally about $3 each). 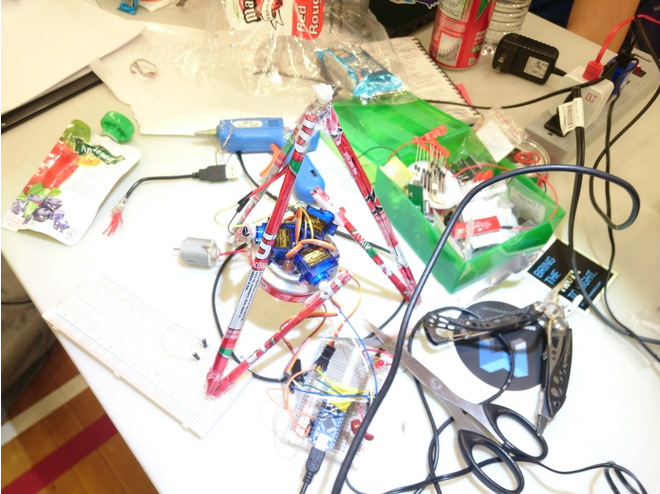 On top you can see the robot’s end effector, an RGB LED. This was given to us by a generous fellow participant, and appropriately covered in hot glue to diffuse the light. We didn’t have a soldering iron, so electrical connections were made using alligator clips and female/female jumpers. An Arduino Nano acts as the controller. With 6 PWM outputs, there were exactly enough pins to control the 3 servos and fade the 3 channels of the RGB LED. Overall, the circuitry and code was pretty straightforward: 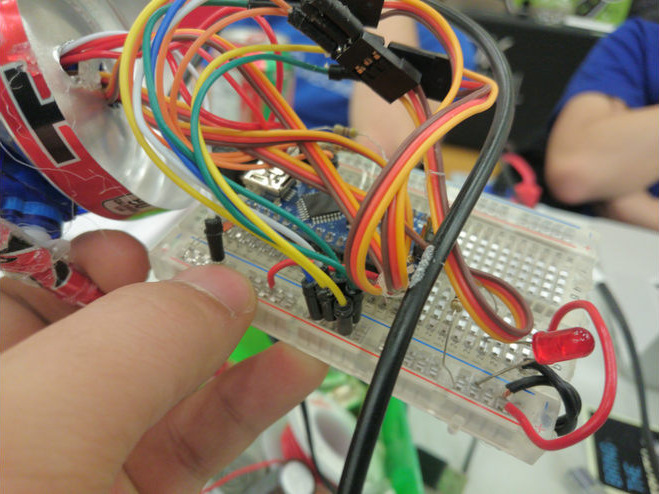 Despite our best efforts, the robot actually worked!

With better motion control, the movements can be made a lot smoother, increasing the quality of the resulting photo - perhaps a good project for another time. For now, LightPainter sits on my desk, occasionally flashing and spinning around.

And one more photo, for good measure: 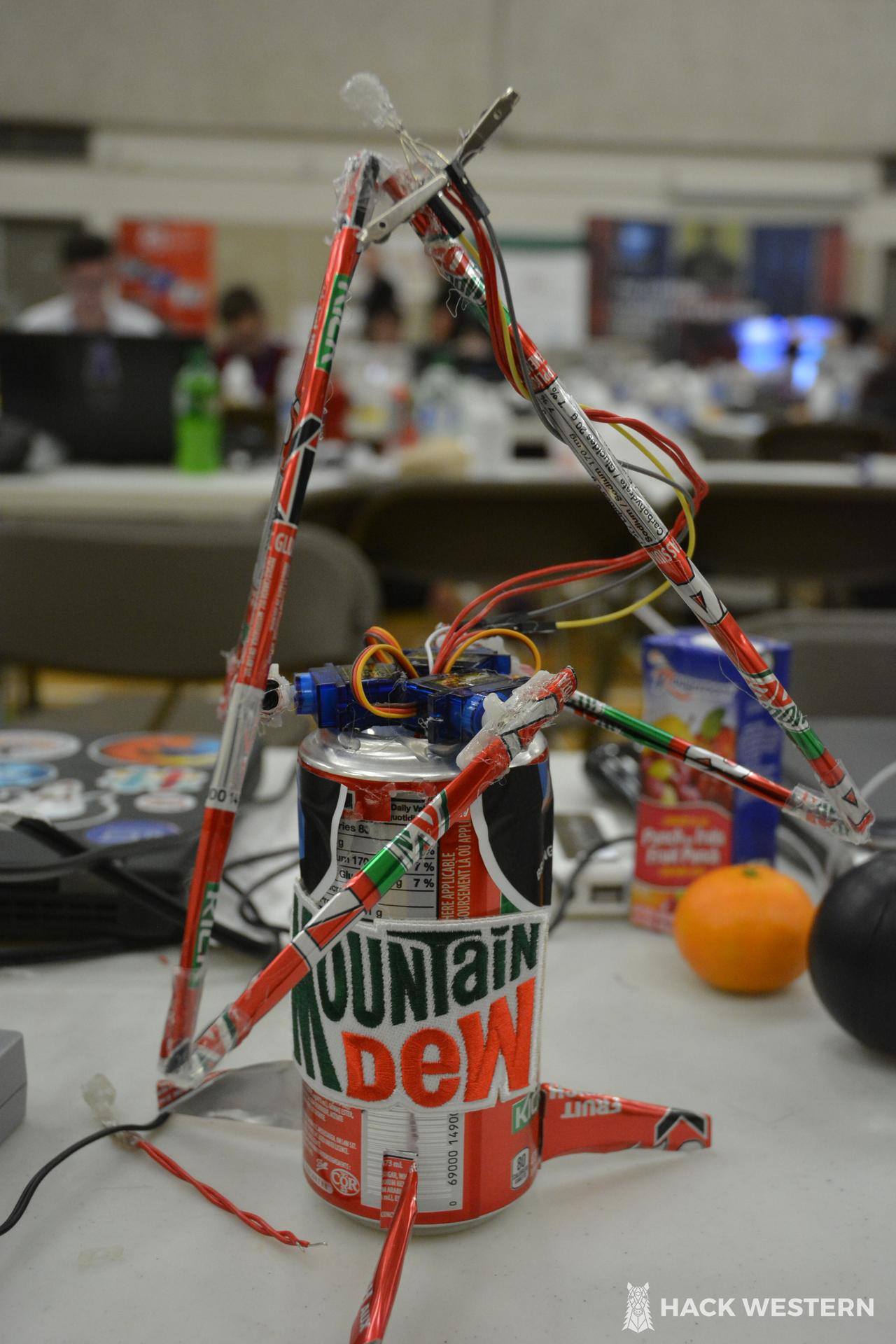