Attack on Checkbox: When data ingestion gets ugly

What has Anthony been up to lately, besides building a massive tolerance to Lazeez hot sauce?

One year ago, I was wondering whether any full-time jobs could offer enough freedom to do everything I want to. There were none, so two friends and I started our own company instead. Turns out it’s a lot of work!

We traded one boss for two dozen, but it was so worth it.

Cross posted from Medium. We’ll be back to our regularly scheduled programming soon!

Disclaimer: All material in this post has been used with permission. Certain details modified for client confidentiality.

The Project That Started It All

We founded our software consultancy so we could pursue our dreams in a way that full-time jobs wouldn’t let us: as a touring death metal drummer, a mad roboticist, and a one-man band.

It was just three of us in Calvin’s living room when our first client called.

“We need a feature for our webapp where users can upload Excel and Word files, then it ingests all the form data to a database.”

Read in some files, parse the relevant pieces, and store them to a database.

How hard could that be?

The forms seemed organised and clear—like this: 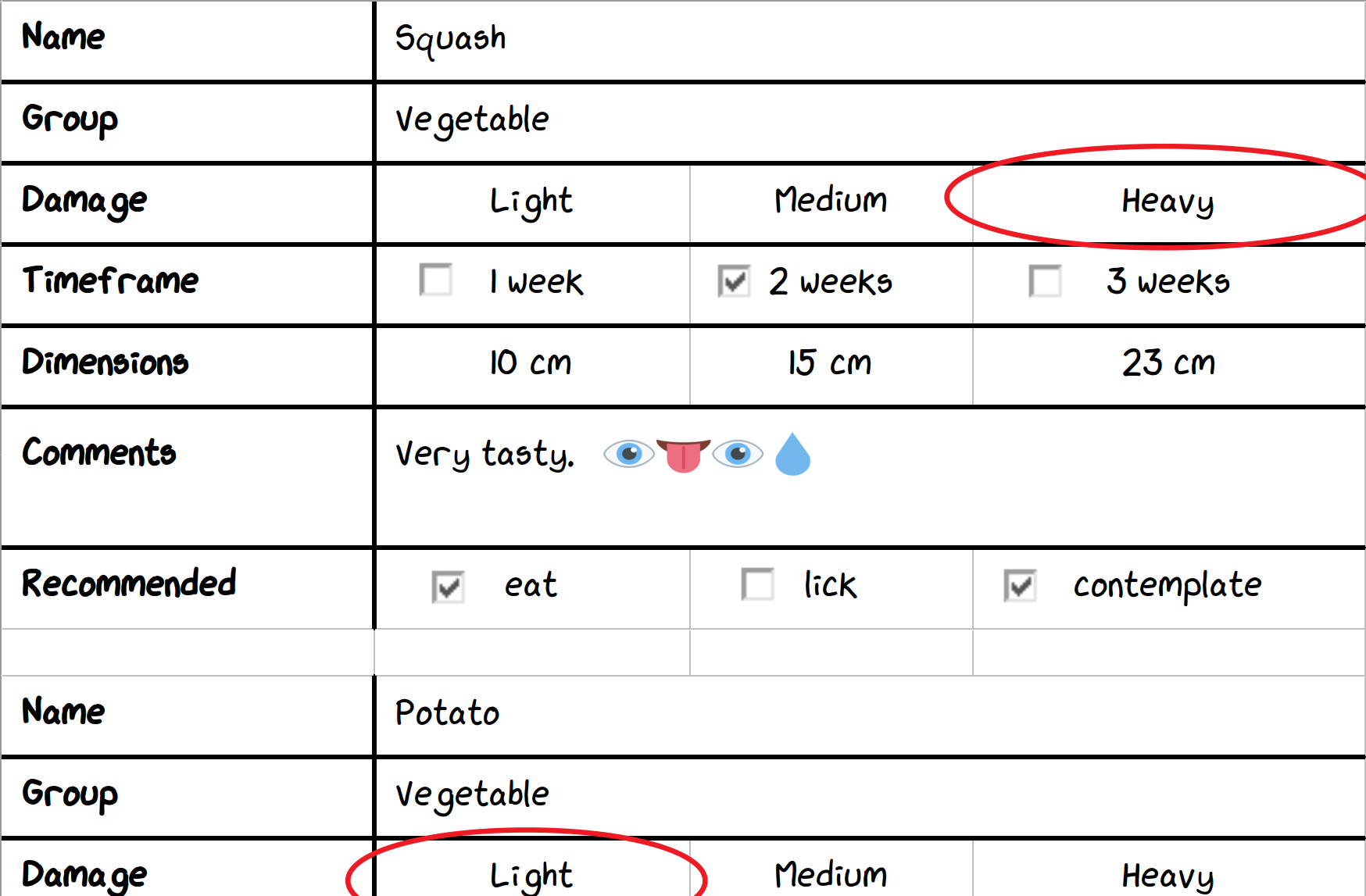 One small segment of an XLSX or XLS form. 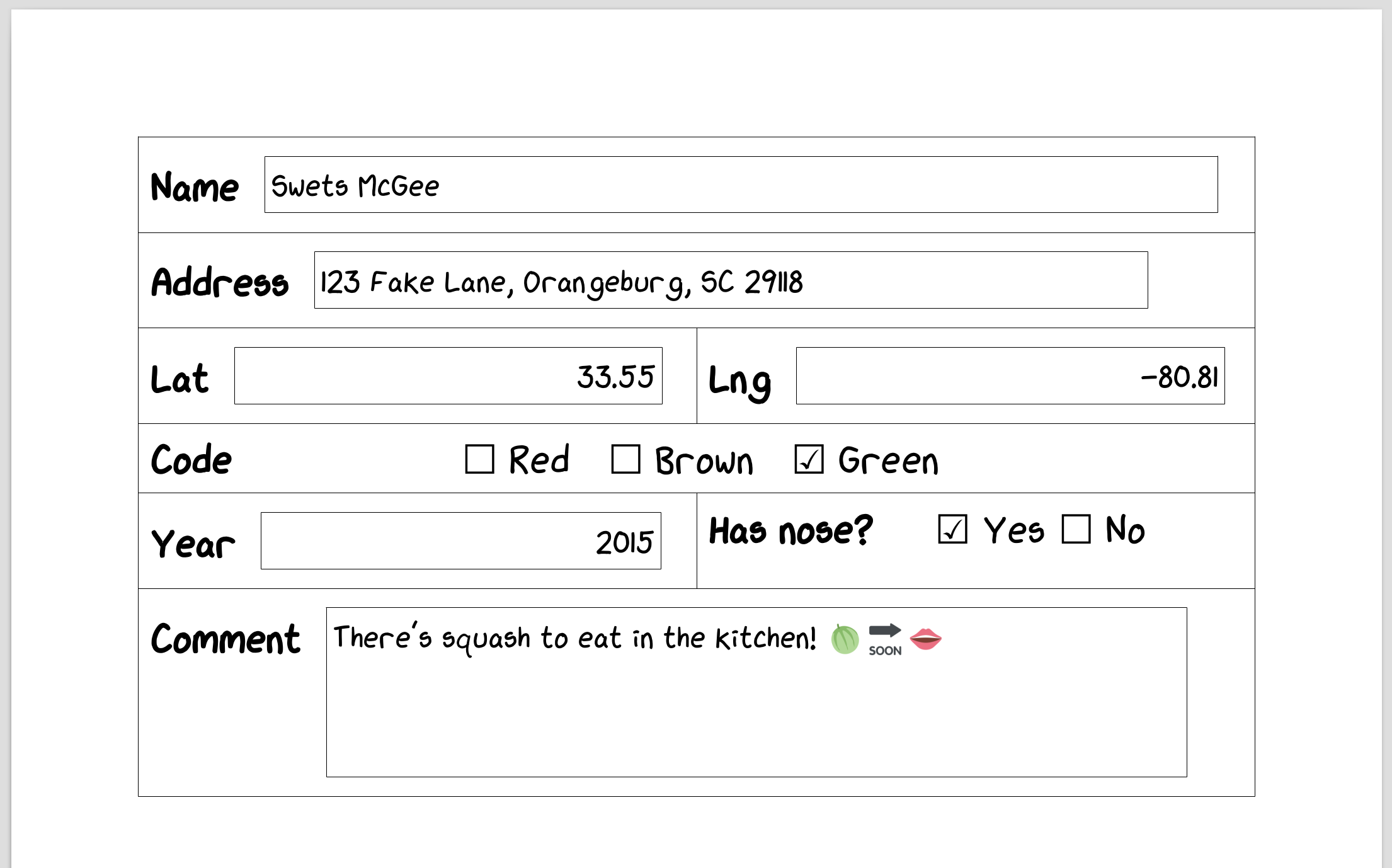 One small segment of a DOC form.

We started with XLSX files. Thankfully, there’s a Python library for parsing XLSX files: OpenPyXL. Soon, we were extracting data like nobody’s business!

However, it was not to last:

Problem: Uh-oh. To pick an option, users were drawing ellipses over them. And sometimes they would be drawn in between options.

Also, parts of the spreadsheet were resized, sometimes causing the ellipses to lose alignment with their options: 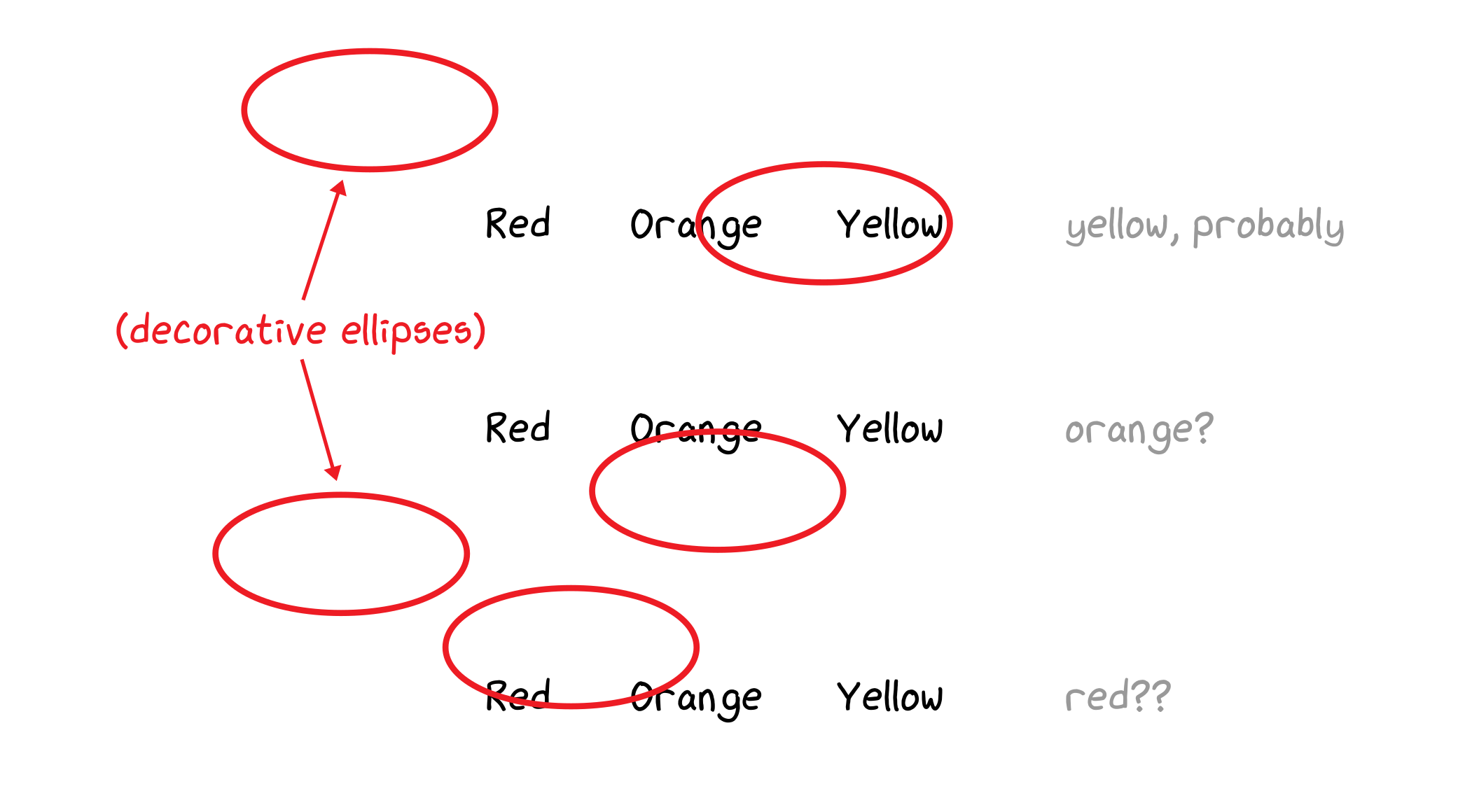 …but not always very neatly.

Also, OpenPyXL (as of this writing) doesn’t support reading drawings from files.

Solution: To start, we researched our options for accessing drawings.

We decided to go with Option 3. Essentially, XLSX files consist of a collection of XML files inside a ZIP file. Retrieving the drawing data would boil down to parsing XML.

Within an XLSX file, each worksheet XML file references a relationships XML file, that associates drawing IDs to their corresponding drawing XML files.

From these, we could determine the location of each drawing, described within each drawing’s metadata by a reference cell and an offset from that cell.

The reference cell’s row (in points) and column (in characters), plus an X/Y axis offset (in points), is the top left corner of the drawing’s bounding box: 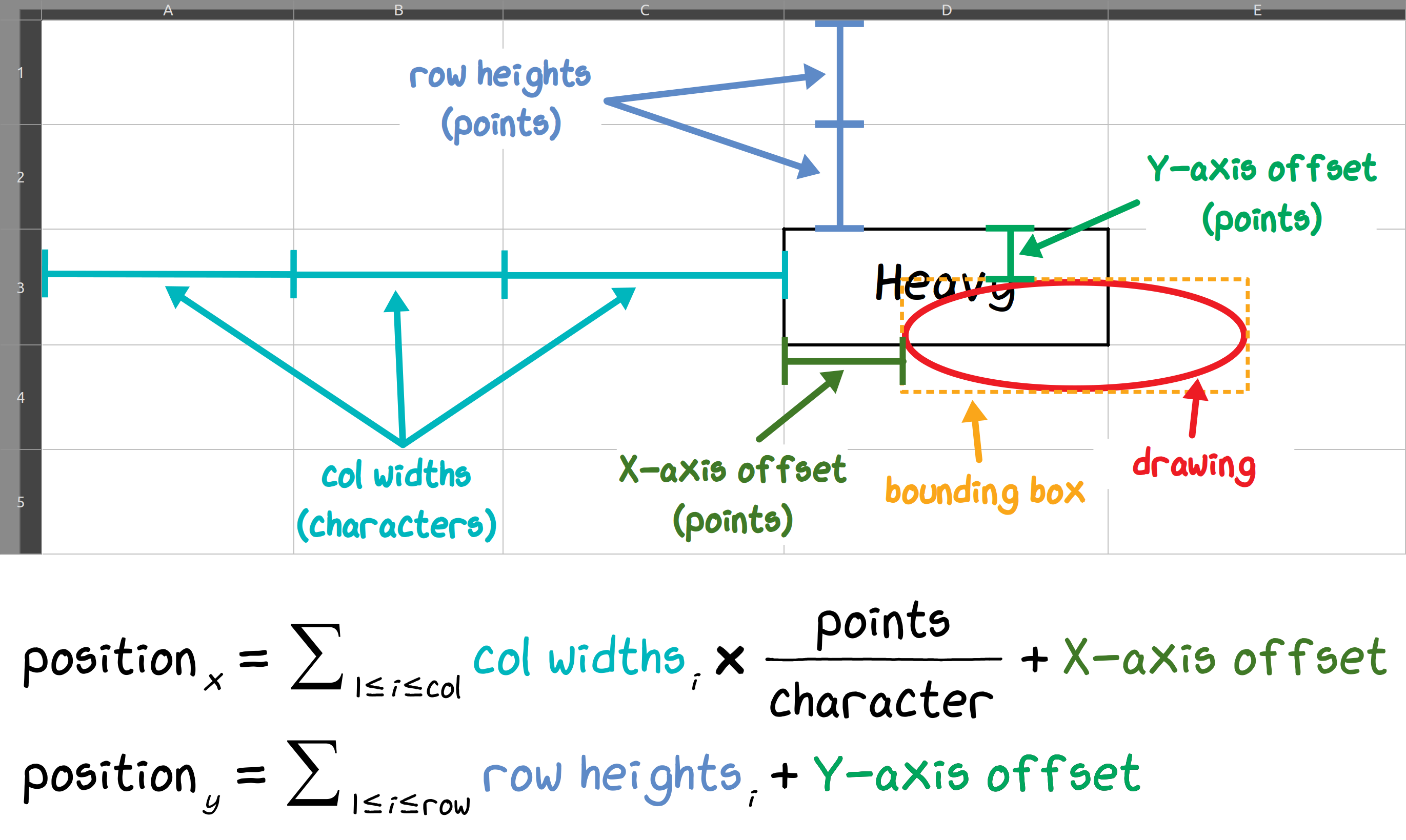 An unusual coordinate system for an unusual problem.

To translate this into a more convenient coordinate system, we converted all units into points, determined the reference cell’s position, and added the cell offset.

Microsoft gives a conversion factor of 8.43, but this was far from accurate when we actually tried it.

Instead, we estimated the actual value to three significant digits via empirical measurement in a test spreadsheet, using the default font settings.

Note: This conversion factor changes with the spreadsheet’s default column-width setting. However, none of the files would change this setting, so we didn’t need to account for it.

Now we have simple coordinates for every cell and drawing! We’ve located cells containing words, and the ellipses that circle some of those words.

Next, we had to determine which of those words are circled. For each ellipse, we looked at the cells overlapped by its bounding box, then found the closest one by midpoint distance.

To catch ambiguously circled options, we filtered out cells farther than a small distance limit .

It wasn’t pretty, but it worked well! A few files needed manual tweaks as they had ambiguities unreadable even to humans.

Sample OLE checkboxes. Not to scale.

OLE is a Microsoft technology for embedding things, such as Word docs inside Excel sheets, or formulas inside Word docs. In our case, OLE was used to embed checkbox controls inside spreadsheets.

However, OpenPyXL doesn’t expose these checkboxes.

Adding OLE form control parsing was pretty simple - it was similar to how we added drawings parsing to OpenPyXL.

Since OLE form controls used the same unusual coordinate system as drawings, we could also reuse the row_col_offset_to_xy_points function from the ellipse-handling code.

To determine where checkbox data is stored within an XLSX file, we created two test spreadsheets: One with a selected checkbox and one with an unselected checkbox. We extracted the XLSX files as ZIP archives, then compared the resulting directory trees.

We saw that each OLE object has a control properties XML file containing its data, referenced by a relationships XML file, which in turn is referenced by each worksheet XML file!

Now we had the location of every checkbox. Looking at the forms, these were clearly placed by hand—some checkboxes were completely outside of their intended cell!

Much like circled items, we associated each form field’s cell with the closest checkbox by midpoint distance.

Problem: This worked, but each form would take ~60 seconds to process; they were huge hand-filled datasets.

Uh-oh. To keep the app responsive this needed to run within a few seconds! Our first suspect was checkbox matching, which takes time with respect to the number of checkboxes.

Solution: Our first idea was to use nearest neighbour search with a discrete Voronoi decomposition, computable in time. 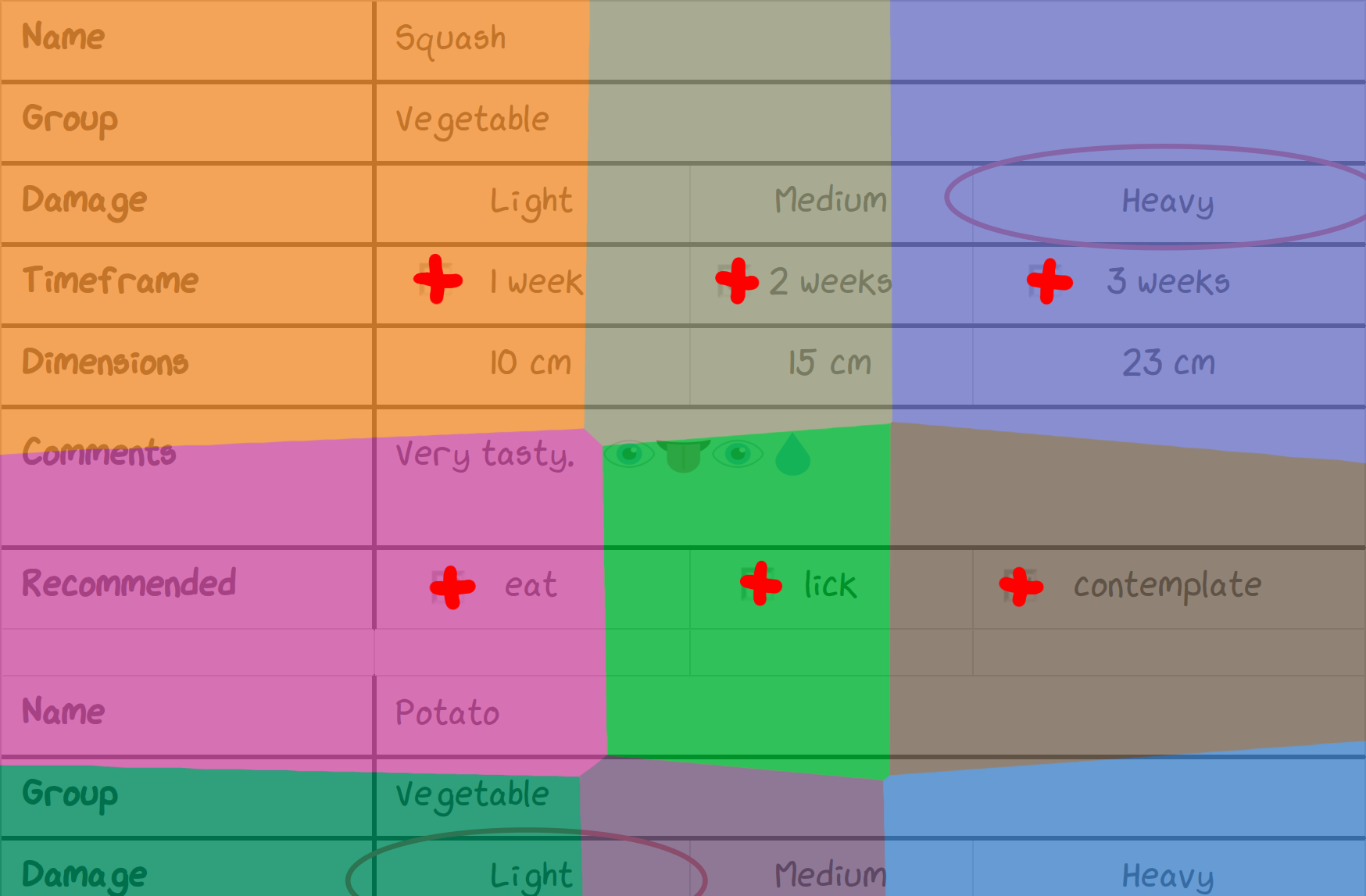 Voronoi diagram; points are checkboxes within the form.

Since the forms were narrow and tall, we instead used a much simpler approach to computing nearest-neighbours-within-distance-limit.

Sorting checkboxes by Y-coordinate, perform a binary range search for all checkboxes within the distance limit (in time), and filter out checkboxes that are definitely too far away.

The nearest neighbour can then be found within the small set of remaining checkboxes: 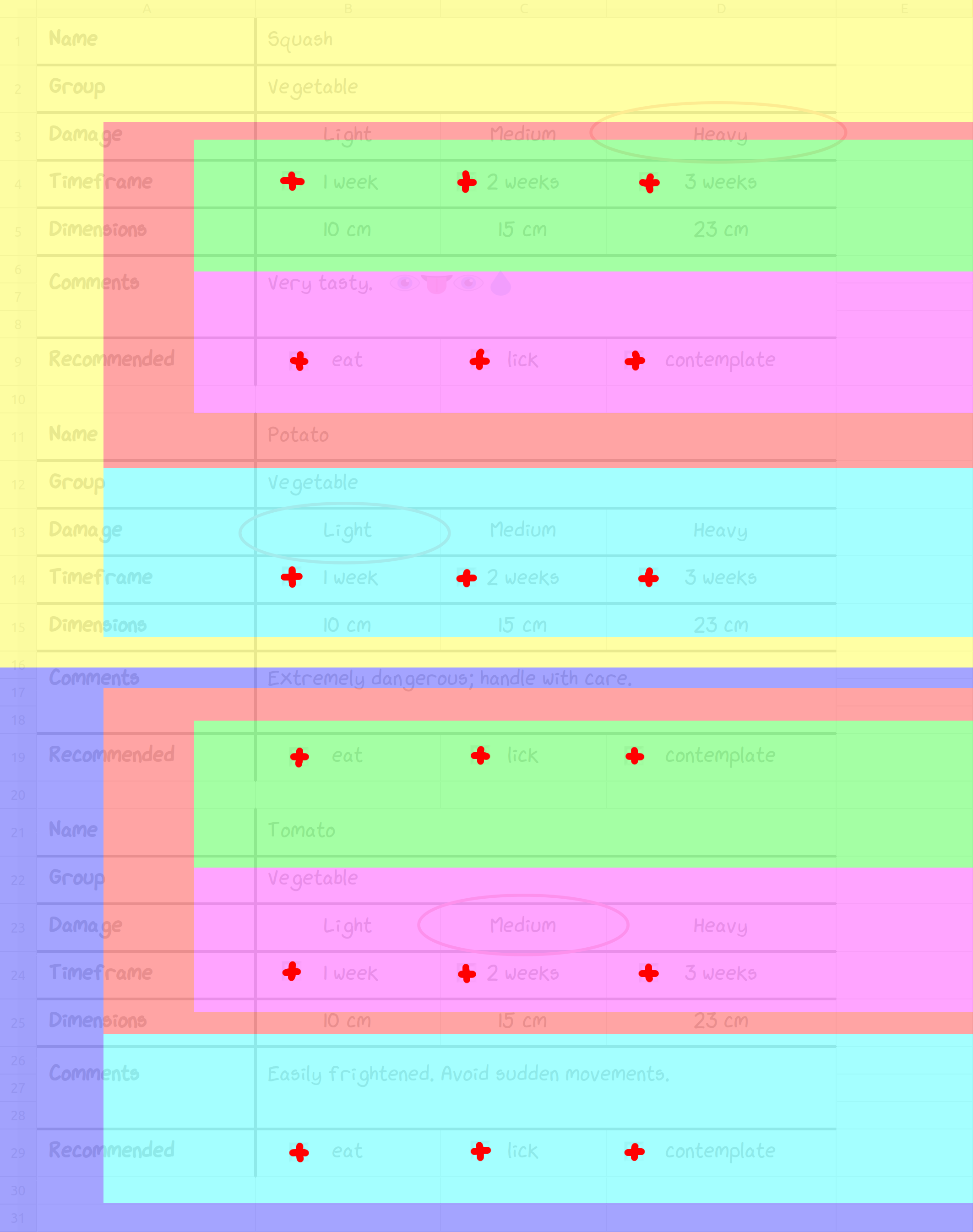 Vertical binary search narrows down candidates to within a small area, that can then be checked one-by-one.

With these changes, processing was now two orders of magnitude faster—well within our performance constraints!

Phew. Things were fine, until we saw this: 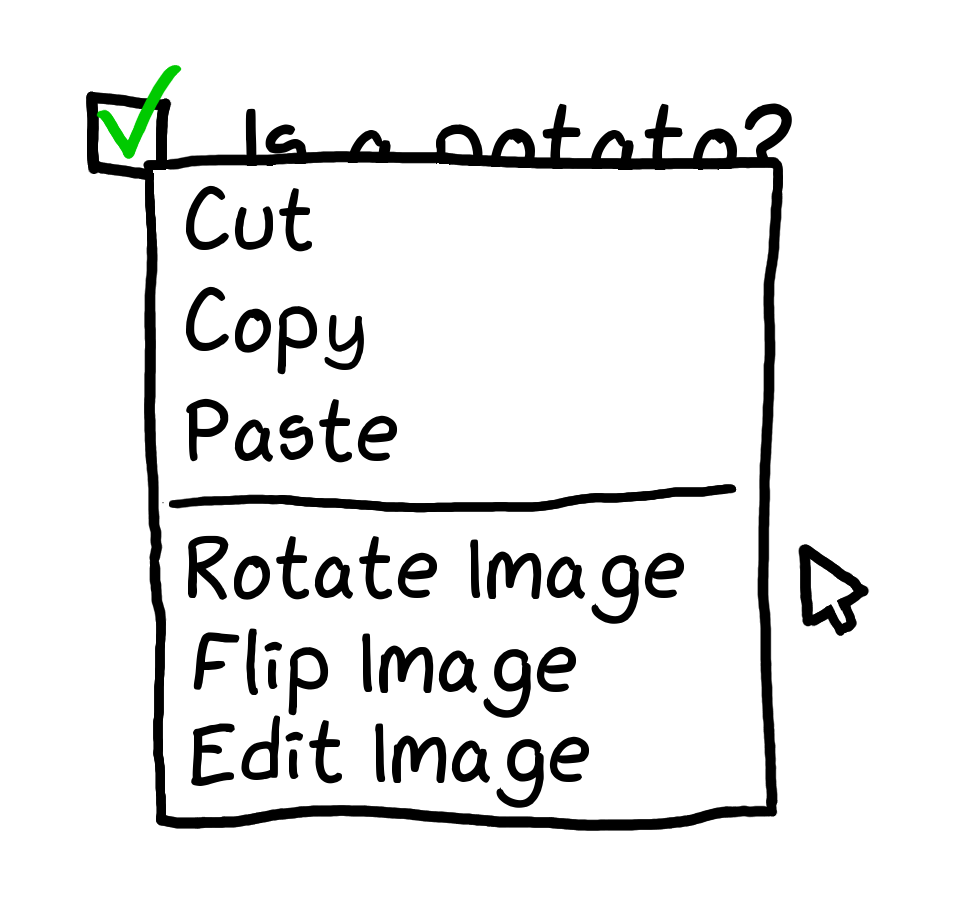 Example of an image checkbox.

Problem: That’s no checkbox—it’s a picture of a checkbox! Users were pasting in images. Images of checkboxes.

Why? Some of these sheets were made with 20-year old versions of Excel, back when OLE form controls weren’t commonplace. Maybe users wanted to make their forms look nicer?

Time for a third extension to OpenPyXL. Finding the image corresponding to each checkbox was similar to what we did for OLE controls: adding an image to a test spreadsheet and comparing the unpacked XLSX files before and after.

But how do we determine whether the checkbox in the image is checked or unchecked?

Solution: The image grayness is actually enough to determine whether a checkbox is checked (after extracting the interior area).

We picked the thresholds by hand after looking at a wide variety of checkbox images. 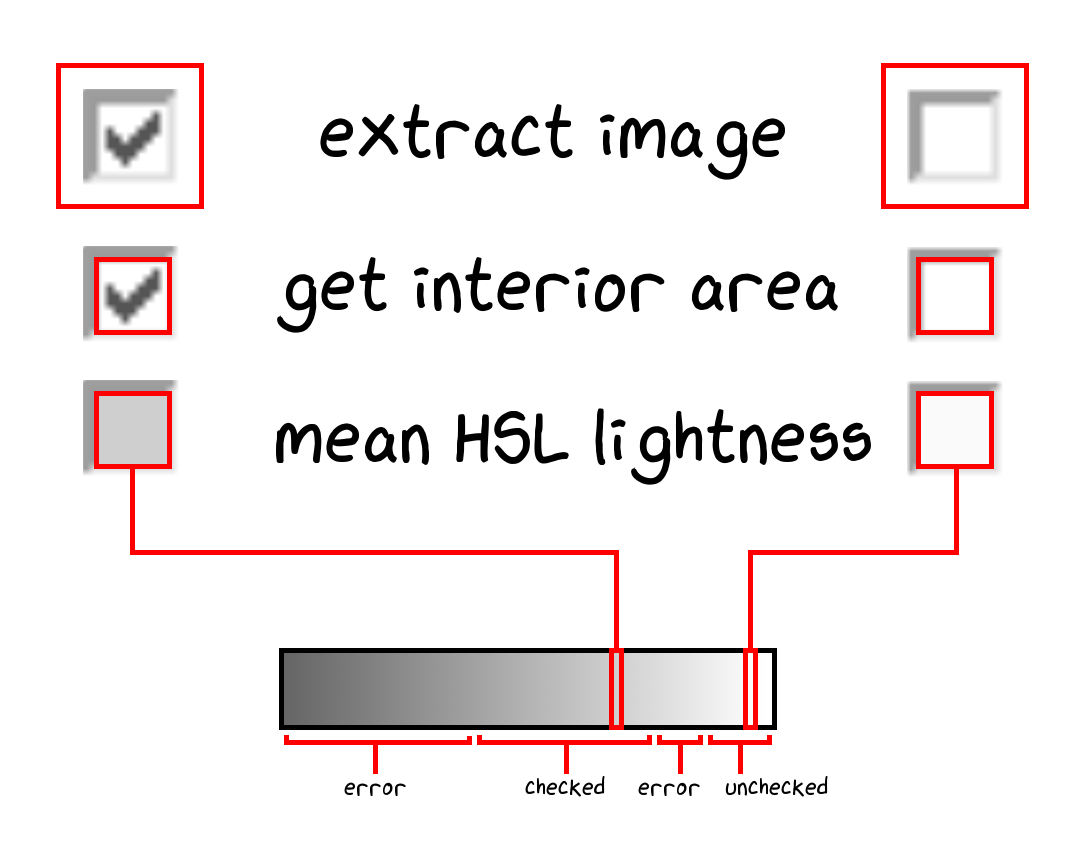 Determining whether a checkbox is checked by looking at HSL lightness of the checkbox interior area.

So far, we’ve only dealt with XLSX files—there were still XLS and DOC files to ingest.

Problem: xlrd could be used to read the XLS files, but it didn’t support images, drawings, or OLE form controls. We researched some alternatives:

Solution: We went with Option 4, using a simple function to headlessly convert XLS to XLSX with LibreOffice and load the resulting file with OpenPyXL:

Huzzah! All of the OpenPyXL-specific code from before now works on XLS files!

With the same technique, we can convert DOC files directly into Docbook XML, which is just another XML format. Although layouts aren’t fully preserved, all of the necessary data is there.

Technical aside: Before going with headless LibreOffice, we also tried Antiword to convert DOC to Docbook XML, but it dropped non-ASCII characters. We tried everything from adding Unicode mapping files, to rebuilding Antiword with various compilation flags, without success. Since checkboxes in the DOC files were Unicode symbols "\u2611" (“BALLOT BOX WITH CHECK”) and "\u2610" (“BALLOT BOX”), they were missing from the output!

Problem: We added LibreOffice to the deploy configurations, but found that it significantly increased container image sizes and deployment times.

Solution: To overcome this, we investigated AbiWord for DOC files and Gnumeric for XLS files. AbiWord requires a graphical environment, so we combined it with Xvfb as a dummy X.Org display server.

Gnumeric was easier to use, as it already comes with the headless ssconvert utility.

Unfortunately, we discovered that AbiWord and Gnumeric take up even more space than LibreOffice, when taking into account all the packages added to the Docker images!

We scrapped the idea and simply deployed LibreOffice in the images.

Despite the unknown unknowns, we iterated fast enough to ship the tool ahead of schedule. All the hard work paid off; our client was ecstatic!

We saved them countless hours of manual labour and cut down on expensive mistakes. They could hit new customer deadlines with results vastly more accurate than manual data entry.

What did we learn?

Sounds easy does not mean actually easy. Be thorough with scoping—never underestimate an easy-sounding task.

Before setting project timelines, meet with engineers to discuss technical details together. Walk through the codebase when breaking down tasks, and account for possible snags that could impede progress.

You can’t predict the unexpected, but you can manage the risks. Sometimes scoping doesn’t catch everything:

Since then, the Hypotenuse team has dubbed unexpectedly difficult tasks a Checkbox: a silly reminder that sometimes we don’t know what we don’t know.